Joseph Baena advises to keep the food simple, healthy and fresh in a recent interview 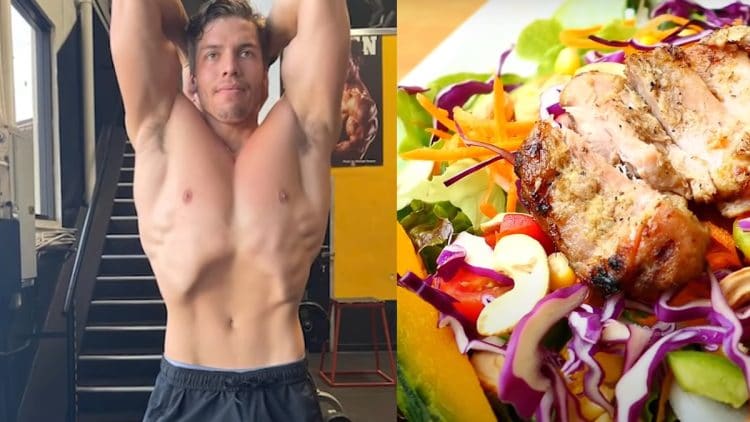 Arnold Schwarzenegger’s son Joseph Baena has inherited the love for bodybuilding and fitness from his father. The 24-year-old budding actor has also learned a lot from his father when it comes to eating healthy and fuelling the body with the right kind of food.

In a recent video interview with Men’s Health magazine’s YouTube channel, Joseph Baena walked the viewers through his full day of eating. Baena keeps his food simple and follows his father’s advice to stay healthy.

Even when away from home for shoots or other commitments, Baena takes it upon himself to eat healthy foods and staying in the best shape.

Joseph Baena starts his day with pretty much the same breakfast every day. It consists of four scrambled eggs mixed with spinach and mushrooms. Baena prefers to make it as an omelet. On the side, Baena likes to eat two slices of a multi-grain avocado toast that he is ‘obsessed with’. As mentioned before, Joseph Baena likes to keep it simple and only adds a little bit of pepper flakes and pepper to give it a little spice.

Joseph Baena prefers to keep his lunch light and simple. It consists of salad or rice, protein, and vegetables. Chicken and Turkey are his go-to proteins. The idea behind a simple lunch is to eat something that is easy to digest.

On his way home after training, Baena drinks his protein shake. Baena said he doesn’t like to drink that much milk. Therefore he uses orange juice to make his protein shake instead of milk or water.

“(Orange juice) is actually good for inflammation and soreness. Put some orange juice, bananas… Put spinach in there, berries… Do my scoop or two scoops of protein powder. If I’m trying to gain weight, I’ll put in a little Creatine and I’ll blend it all up and that’s my protein shake,” Joseph Baena said.

It is difficult to maintain a physique like Joseph Baena without supplementing the food with extra nutrition. Baena takes protein powders, Creatine, fish oils, and turmeric for all the benefits associated with them.

Read: Joseph Baena Shares New Training Plan: ‘I Have Been Seeing The Best Results From This Split’

Baena loves to cook chicken breast or ground Turkey for dinner. He is an avid fan of Mediterranean food. However, he is consuming plant-based protein substitutes off late that he finds light and easily digestible.

“They’re light. I can digest them really easy before going to bed so I don’t have nightmares when I fall asleep… Which tends to happen when I eat too much steak, actually,” Joseph Baena said.

Eating healthy food is definitely a prerequisite for good health but so is satisfying taste buds from time to time. On cheat days, Joseph Baena likes to enjoy pastries and pastries that his mother makes for him. He said that it is frustrating at times to stay away from them. However, he admitted to sneaking in a piece of pie every once in a while.

“But a huge cheat day of mine is Shawrma… Specifically Avi Cue Shawrma. He makes the best Wagyu beef Shawrma I’ve ever had in my life. When I eat this, I just feel amazing,” Joseph Baena said.

That was all about Joseph Baena’s diet. He took the leave with a message ‘Keep it simple, keep it healthy and keep it fresh’ for those who want to adapt a healthy diet.

Courtesy of the Men’s Health YouTube channel, you can watch the full interview here: