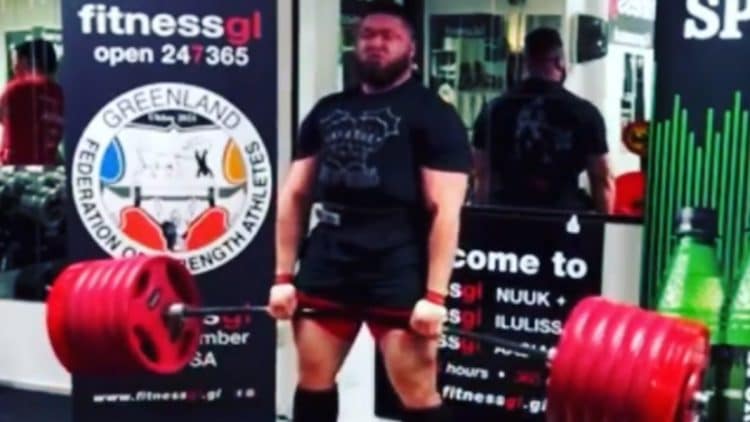 Many people are unfamiliar with Kim Ujarak, but he is a great strongman and a static powerhouse. Kim is a 5x Greenland’s Strongest Man. A strongman legend, Laurence “Big Loz” Shahlaei, is also his current coach. Kim’s partnership with Big Loz seems to be going well, as he just hit a new deadlift PR of 425 kg (937 lbs), which is also a Greenlandic Record.

The most fascinating part is the speed of Kim Ujarak’s pull. He did not struggle at any point of the lift, and made it look like he could deadlift a lot more weight. Kim deadlifted with a conventional stance, using only wrist wraps and a lifting belt. Just 10 days ago, he weighed in at 143 kg (315.3 lbs), meaning he pulled 3x his bodyweight.

Kim has not spent a lot of time competing in major competitions yet, but his future looks bright. His greatest success came in the 2021 Arnold Strongman Log Press And Deadlift Championships UK. Kim dominated the field in the log press event, having lifted a 140 kg (308.7 lbs) log six times. The second-place finisher did 3 reps less than Kim.

Kim also took part in the first-ever Magnús Ver Magnússon Strongman Classic in 2021. He placed 10th out of 14 competitors but showed impressive performance on the axle bar deadlift for reps. The axle bar was loaded with 325 kg (716.5 lbs) and Kim came second in the event. He did 6 reps, only one less than Maxime Boudreault.

Kim Ujarak has recently battled with Covid-19, but came back stronger. His deadlifting prowess is very impressive, and he could soon join the exclusive 1000 lbs Deadlift Club. Alongside Kim’s hard work and genetics, his coach is very much capable of taking him to the highest level.