Son of Arnold Schwarzenegger, Joseph Baena breaks down the back and chest training portion of his new three day training split 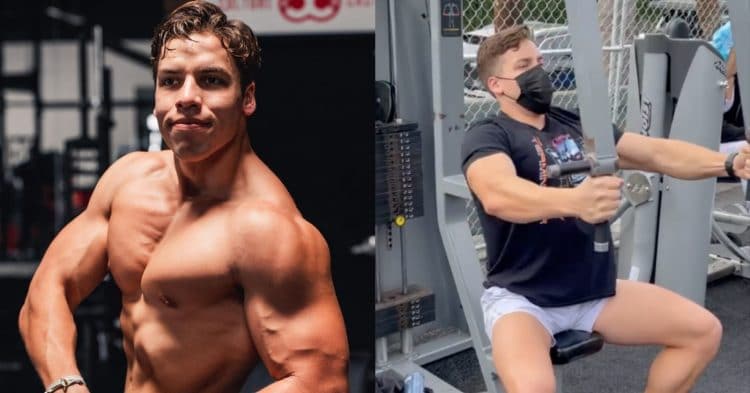 As the son of bodybuilding royalty, it is not surprising that Joseph Baena is a true student of the game. He recently has been doing a new training split that he discovered, which has been paying serious dividends.

Naturally, Baena is someone that gets attention in the sport because he is the son of Arnold Schwarzenegger. However he has been making a name for himself outside of that with his impressive drive.

He has not yet made his bodybuilding debut, but it appears that this will be coming soon. In the efforts to build himself up for that, he has been constantly hitting the weights and bulking up, while showing glimpses of his father at every turn.

Although as anyone who spends enough time in the gym will tell you, it is always good to switch things up. Recently Joseph Baena has been doing a bit of changing in his training split, and he is liking his results.

Taking to Instagram, he reveled that he used The New Encyclopedia of Modern Bodybuilding to find a strong three day split that has been working out for him. While he did not detail all of what he does, he did share the back and chest portion of that split.

“I love trying new things, but especially when it comes to fitness and training.

Personally I have been seeing the best results from this split I got straight out of “The New Encyclopedia of Modern Bodybuilding”
I thought I’d share with you guys if you don’t have the book.

It’s a three day split (which allows you to hit each group twice a week): Chest/back, shoulders/arms, and legs.

If you’re not seeing the greatest results from what you’re doing now it’s always good to switch it up from and try a new split.

The videos are what an average chest/back day looks like.

Comment if you wanna see the shoulder/arm and leg days”

Joseph Baena’s Chest and Back Workout

The videos that Joseph Baena shared detail his chest and back workout, which is one third of this new training split. It is made up of numerous parts, ranging from bodyweight exercises to free weights and machines.

This is his chest and back workout, with weight included where evident:

Of course, who could forget that while he was doing this intense workout, Joseph Beena was sporting a Terminator shirt to pay homage to his father. He certainly looked solid throughout the whole process.

Will you be trying this chest and back workout?