Legendary 212 Bodybuilding champ Flex Lewis takes fans through his stem cell therapy process as he continues his recovery ahead of 2021 Mr. Olympia 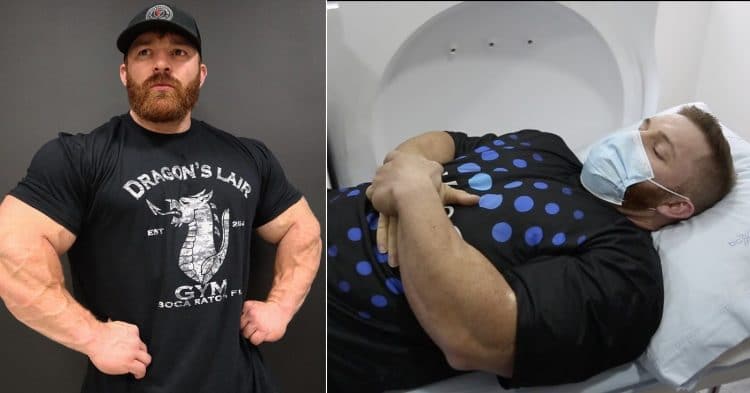 Seven-tine 212 Olympia champ Flex Lewis has been working to recover from some injuries heading into the 2021 bodybuilding season. He gave fans a glimpse of the treatment he is going through, to help heal.

With the level of accomplishment he has had in the 212 Division over the years, fans were pumped to see the Open Bodybuilding debut of Lewis. They were anxiously awaiting to see how he would look, compared to the likes of Phil Heath, Brandon Curry, Big Ramy, and the rest of the Men’s Bodybuilding elite.

Unfortunately that debut did not come, as he was forced to withdraw from the contest a few months out from it’s December date. He revealed after the fact that it was a recurring problem in his shoulders which led to him deciding, under duress from his wife and doctors, to hold off on making his Olympia return.

Since then, Flex Lewis has been working on rehabbing the injury, and has been doing some light work in the gym. He has even given a glimpse of his physique as he prepares to start prepping for competition in 2021.

A big part of this recovery is coming in the form of stem cell treatment. He recently took to his YouTube channel to give fans a detailed look into the process of him traveling to Colombia, to get treatment from the well-regarded Bioxcellarator facility.

“I’m here at the hotel, which is connected to Bioxcellarator,” Lewis said after taking a flight from Florida to Colombia.

“I’m very excited to be starting my treatment tomorrow, bright and early… A little bit nervous, excited most definitely, but I’m ready to get some shut eye. I’m ready for tomorrow.”

With that, Flex got some rest and was ready to get started with the procedure the next day. He goes through the registration process, and they give him a detailed itinerary for his next few days of treatment.

He then meets with the doctor to discuss his diet and training history, as well as going through the extent of his injury. They then draw some of his blood, before setting him up for an MRI.

“Two hours,” he says. “This is the third one. We’ve done both knees, right shoulder, and now we’re doing my left shoulder and we’ve got my two elbows left.

Flex Lewis makes it through the scans and gets a bit of a break before it is time for him to get an IV treatment. Before they stick him, the nurse advises him to write all of the positive things he is hoping to get from the stem cell treatment, to help keep the right mindset.

Next he moves on to the Hyperbaric Chamber portion of the treatment, where he spends some time in a fancy looking tank. He even jokes around by writing help on the steam in the glass.

That was the end of the treatment for the day, as he then goes on an excursion in order to keep the stem cells active and working in his body. He then proceeds to reflect on the trip and how much this issue has effected his bodybuilding career by making him lose a ton of weight.

“Hopefully this will be a life changing opportunity for me,” Lewis said.

Now this is not the end of the road for Flex Lewis, he will still have to finish his treatment and hope the results work out. That being said, this is a step in the right direction, and he says that he has heard nothing but positive things from people getting this same treatment.

With a little luck, he will use this to get back on the right track and have the performances this year, that he wanted last year.