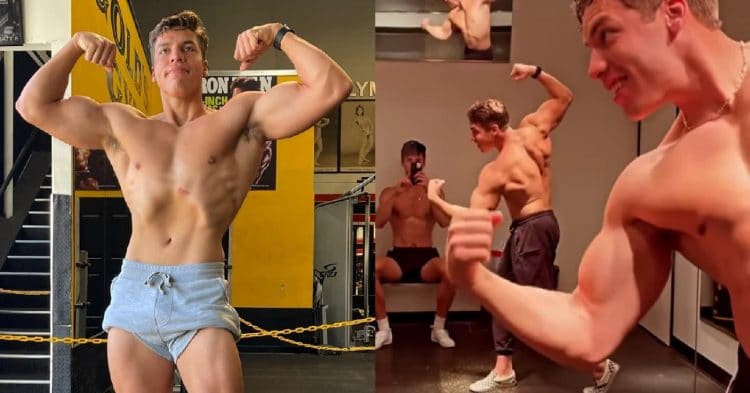 It has been a slow and steady process for Joseph Baena to prepare himself to make his bodybuilding debut. He recently shared a posing update, that gives a glimpse of his progress and shows just how much he is the mirror image of his father, Arnold Schwarzenegger.

Over the years, Baena has built a reputation as being a promising athlete in his own right. However what has gotten the attention of his fans, is his uncanny resemblance to Arnold, with whom he has a good training relationship with.

He has been working on making a bodybuilding debut of his own, likely to compete in the Classic Physique division, but even without that being scheduled, he is regularly hitting the gym and training hard. Sometimes working with his dad, and sometimes working on rooftops, it is impossible to not draw comparisons between he and the legend anytime he strikes one of Arnold’s iconic poses.

Joseph Baena was back at it again recently, doing some posing practice during a morning training session. He uploaded a video of this session to his Instagram Stories, giving a solid glimpse at his current physique.

Not only does he show a pretty solid classic style physique, but with each pose he hits, he bares a striking resemblance to Arnold Schwarzenegger. He even throws in some of Arnold’s favorite shots, adding fuel to that fire.

It is not surprising to see how much Baena mirrors his father, especially given how much he trains with Arnold. In fact, the two had a training session just a few days earlier.

While he did not share any video footage of the session, Joe joked about how hard Arnold pushes him during their sessions training together. He knows that anytime he works out with his dad, he will leave the session with nothing left to offer.

“This selfie was taken moments before my dad suggested I do “forced reps” for the rest of the workout. You have to go all out and absolutely NO cheating when you train with him, so you know I’m going to be hurting tomorrow,” Baena wrote.

“Overloading on the rows, bench press, pull downs, etc… thankfully my studly training partner helped me get every last rep. This is another great approach to training and a fantastic way to build size and strength! Try it out with your training partner 💪”

It is not exactly clear when Joseph Baena will make his first appearance on the bodybuilding stage, but he is following after Arnold Schwarzenegger in another way. He actually just finished filming his first film role, and will be making his on screen debut soon.