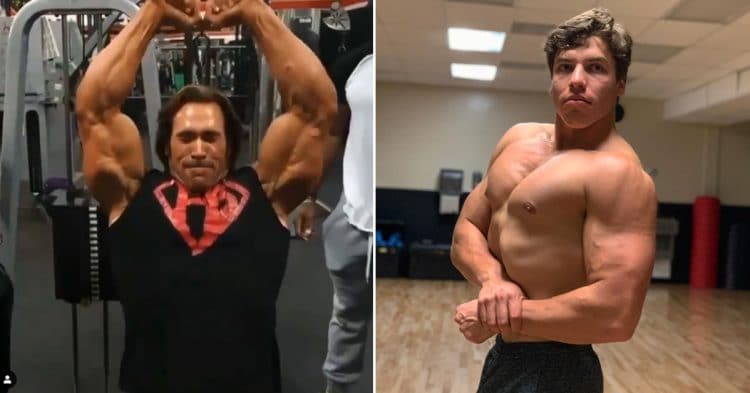 Joseph Baena is used to having really intense workouts. However, he took things to the next level recently, by doing some arm day training with Mike O’Hearn.

As the son of bodybuilding royalty Arnold Schwarzenegger, Baena is no stranger to a super hard workout. He has been known to work extra hard alongside his father, in training. On top of that, he is not afraid to keep that same intense energy when he is training with other people.

This is what made Baena the perfect person to try out Mike O’Hearn’s crazy arm day workout. O’Hearn is the four-time winner of the Mr. Universe contest and is still jacked at age 51. The reason for this being his unbelievable work ethic in the gym. This was something he looked to share with Joseph, in his most recent YouTube video.

Here, the two go through Mike’s intense arm circuit. The pair start off with some warm-ups, with Baena following O’Hearn in taking a lighter approach to these early exercises. He feels it important to take what he calls a “less is more approach” to it.

Then it is on to the actual working sets. As they train, Mike notes that it is a lot easier for younger people to recover in between sets. Moreover, he explains to Baena that he does not like to push his reps when he is fatigued, feeling that this is just a double negative. However, with Joseph being so young, Mike felt like they could shock the body a bit, and do some size building exercises to end the workout.

“They’re young, and the one thing they can do right now is shock the body,” he says. “You don’t have to be so locked into the format of what everybody says you need to do. Change that stuff up.”

At the end of the workout, Joseph Baena is feeling a different kind of burn. Although he admits it is not the type of workout he is used to, Mike O’Hearn’s arm day routine still left him feeling the same amount of pain. All things considered, it was a pretty solid day.