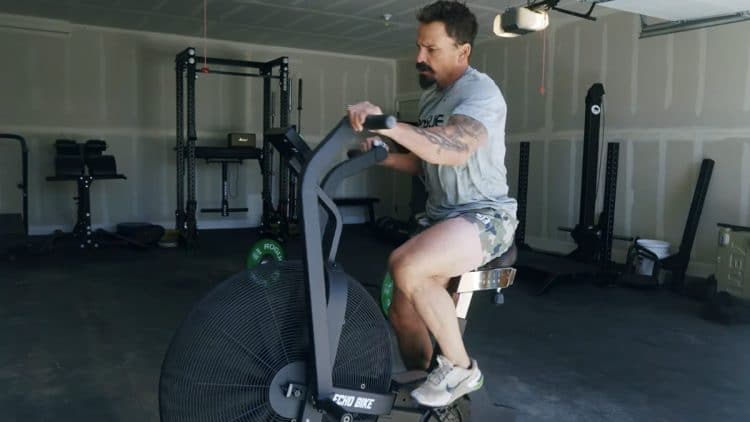 Josh Bridges is one of the most notable athletes in CrossFit for a reason. Most notably, he claimed a second-place finish at the 2011 CrossFit Games, but the former military man won the hearts of fans with his vibrant personality. Josh has retired from CrossFit, but he is still training as hard as ever in pursuit of new challenges. These endeavors require a proper workout plan and equipment, which would enable Josh to continue training properly. For this reason, Josh Bridges built a new garage gym, which is fully made by his standards.

Josh Bridges gave a full and exclusive tour of his gym, and the video was featured on Rogue’s YouTube channel. Like many of today’s CrossFit athletes, Josh is sponsored by Rogue, so the majority of his equipment is from their brand.

Josh Bridges opened up his gym tour with his favorite piece of equipment, which is the Echo Bike.

“Good old Rogue Echo Bike, my go-to. You can get so much out of it. If I was gonna get one piece of equipment, it would definitely go with this.”

The Slam Balls are also a part of Josh Bridges’ collection, while they were also a regular piece of equipment he used while preparing for his boxing match. Josh had a fight against Jacob Heppner in 2021, which he ultimately lost as Jacob beat him on judges’ decision.

“When I was preparing for my boxing match last year, I was using the slam balls doing a ton of rotational throws.”

Josh Bridges also uses weighted vests, which make running or performing standard exercises more challenging. Alongside the vests, he is an owner of a dumbbell collection, which goes up to 100 pounds (45.5 kilograms). Initially, these were used for dumbbell snatches, but Josh now uses them for bench and farmers’ carries.

In one corner of his gym, Josh placed a Trueform running machine. He also pointed out how helpful this was during some unpleasant times.

“This just helps with my knee. When I had knee surgery, knee injury, running on pavement always ached and was really bothering at first. So, the trueform definitely helped.”

A GHD machine was another favorite of Josh’s that he placed in a corner of his gym. Right next to it is the multi-purpose squat rack. His last piece of equipment is his Jacob’s Ladder machine.

Josh Bridges also has a smaller basement gym, which is occupied by another squat rack, an echo bike, and a GHD machine. However, he also has the gymnastic rings setup, while the Ski Erg has its own place in the same room. The final piece of equipment Josh possesses is the Cold Plunge, which is essentially an ice-cold bath for recovery.

Josh Bridges took up CrossFit in 2005 and made six appearances at the CrossFit Games. He placed in the top 10 three times, while his greatest finish was in 2011 when he claimed a silver medal. Shortly after that, Josh injured his knee. However, upon recovering, Josh came back to continue competing at the highest level. He is now retired, so it is unknown what the future holds for him.