The Fittest Man on Earth 2021 gives fans a look at his new garage gym which houses a special made squat rack and a lot more. 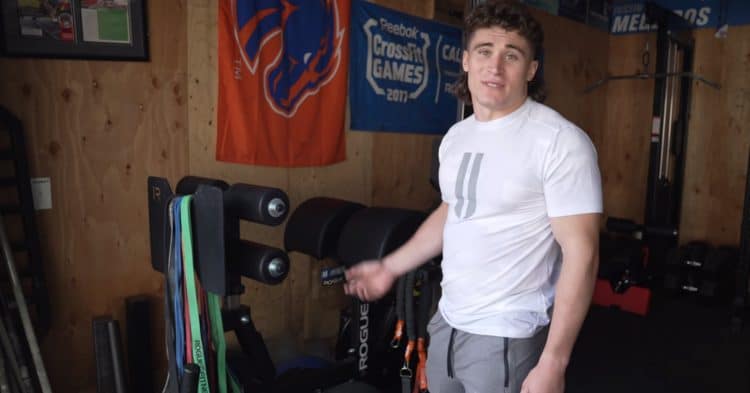 The reigning CrossFit Games champion Justin Medeiros, finally got all the components of his gym set up and is ready to show it off. Medeiros is the 2021 Rogue Invitational champion, and as such his sponsors Rogue Fitness helped him complete his garage gym.

While Justin had some great success in the year 2021, it is also worth mentioning his CrossFit Games debut in 2020, where Justin Medeiros managed to finish 3rd at only 21 years old.

Justin’s gym actually starts on the garage patio, where he has his first rig installed, but Justin explains that it wasn’t as neat and accessible before.

“When I first got here, we didn’t have any mats out here, and the cement was like rock and there was no room to work out, so once we moved in we poured all the cement, and now there’s so much room to work out.” said Medeiros.

The outside rig is a 20 ft tall metal component that is attached to his garage, it has a pull-up bar, hanging gymnastic rings, and a climbing rope. It was one of the first rigs Justin had. Next, Justin shows off his newest addition to the gym and that would be a lat pulldown machine which he seems to be pretty excited about.

“I remember walking in and thinking: Dude, I have a freaking lat pulldown machine, in my garage.”

Right next to the lat pulldown machine is a squat rack, which has the shape of his last name, Medeiros, cut out of a large metal plate. The first thing Justin got from Rogue was a complete dumbbell set, ranging from 5 to 125 pound pairs. Justin is very proud of the dumbbell and weights rack, which he made by himself.

“It’s like my pride and joy. I was like: ‘Oh yeah! It should take me an hour to build.’ And it ended up taking me three and a half hours.” said Medeiros

Of course, Justin has a corner dedicated to cardio machines, and those are the assault and the echo bike, as well as the assault runner which he got because of the frequent snow in Boise, Idaho. Medeiros explains why he got two bikes.

“They both show up in competition. I think they are both really different machines.”

Next up is a machine that he frequently uses and that would be a Concept2 SkiErg, Justin also points out that all the machines travel with him wherever he goes. Medeiros likes to be able to train competition type exercises, and for that reason, he has the same model GHD (glute ham developer) that is used in competition.

Justin had a chance to qualify for the CrossFit Games in 2019, but a sandbag workout foiled his plans. For that reason, he got a 100 and 150 lbs sandbag that he uses all the time.

“In 2019, I had a shot to qualify for CrossFit Games, and I got buried by a sandbag workout.” said Medeiros.

In the corners of the gym, Justin has some stacked barbells, jump ropes, and all the accessories. All that is left are some small devices in the basket, next to the cardio machines. In there he keeps his ab mat, ab wheel (“Evil wheel”), burn machine speedbag (which he got from Mat Fraser’s home gym video, who called it a “Game changer”), and some fat grips.

“It’s a little tiny space, but we try to get everything we can to fit in here.”

Even though it is not huge, Justin’s gym looks great, and it doesn’t seem to be missing anything. Medeiros looks to be set for everything CrossFit based, and after winning his first CrossFit games at only 22 years old, we can only imagine the career he is going to have.

You can watch the video here, courtesy of Rogue Fitness YouTube channel: