Men's Open mass monster Hassan Mostafa is turning heads after showing off how peeled he is just days out from his next bodybuilding show. 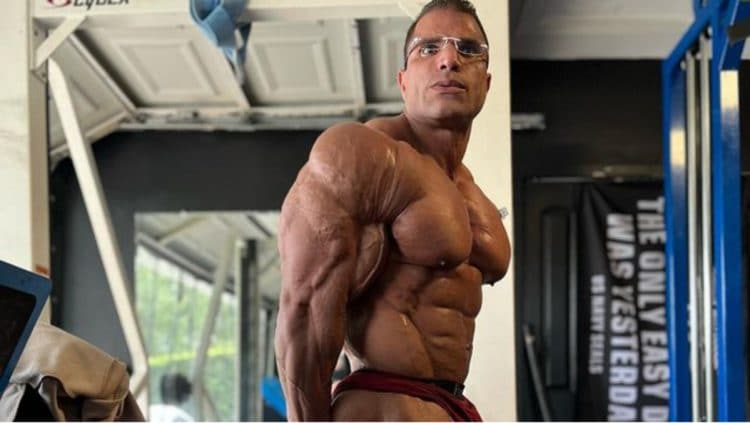 Men’s Open competitor Hassan Mostafa is sending out a warning shot to anyone who plans to stand against him on a bodybuilding stage this year. In a recent post made to Instagram, Mostafa looked shredded four days out from the 2022 Orlando Pro.

Widely regarded for his size and overall conditioning, Mostafa emerged as a threat in the IFBB Pro League in the last few years. While he was unable to snag gold during his season last year (2021), he displayed consistency at the highest level, a quality that many modern bodybuilders struggle with nowadays.

As with many high-level bodybuilders, staying in contest form can be difficult for an extended period of time. This was the case for Mostafa last year. He placed sixth at the 2021 Chicago Pro and then took fifth at the Texas Pro in the same calendar year. Despite the lackluster results, Mostafa attempted to redirect his focus at other shows but to no avail. He turned in a ninth place showing at the 2021 Arnold Classic and capped the year off at Mr. Olympia, however, found himself outside of the top ten in 13th place, respectively.

The Egyptian native’s quest for redemption started at the 2022 Puerto Rico Pro this year. Mostafa was crowned champion, demonstrating that he is more than capable of dialing in his physique when push comes to shove. On July 2, 2022, Mostafa plans to win his second event of the year when he takes on all comers at the Orlando Pro, expected to take place in just four days.

In a recent physique update, Hassan Mostafa showed off the gains he’s made throughout prep.

Mostafa has kept fans up to date on the progress he’s made in 2022. The Men’s Open competitor presented a physique update at the end of March, showcasing some of the muscle mass he’s packed on since coming up short last year. Many believe that he traded some size for conditioning recently, as he looks to be in much sharper condition compared to a few months ago.

This year’s prep hasn’t been quiet for the Men’s Open mass monster even while observing Ramadan. Despite focusing on prayer and fasting from April to May, Mostafa maintained that his macronutrients stayed the same during this season. Since adjusting his diet, Mostafa mentioned that his weight also remained steady over the past few months.

In addition to his nutrition, Hassan Mostafa is bringing the heat during training sessions. The IFBB Pro has gone to great lengths to improve his lower body, most notably his quads. Given his 13th place finish at Olympia last year, Mostafa was well aware that he needed to address preparation in a comprehensive manner.

Hassan Mostafa has already earned his invitation to compete at 2022 Mr. Olympia following his victory in Puerto Rico. Judging by his current look, Mostafa is ready to win his second show of the year when he storms the stage in Orlando, Florida this weekend.