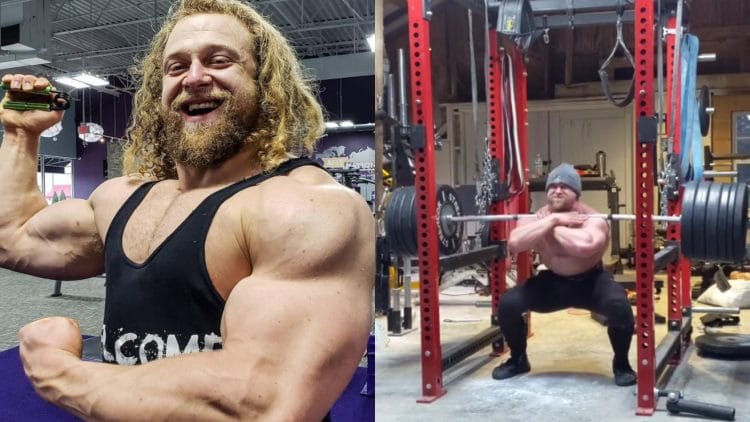 Jon Call, also known as Jujimufu, had his first full powerlifting meet over the weekend. Following that experience, he is right back in the gym, hitting some new personal records.

Jujimufu is a YouTube fitness guru, and one of the most popular on the channel. He got a boost to his profile from competing on America’s Got Talent, helping push his channel to over a million subscribers. Fans are attracted to his incredible flexibility, and ever increasing strength.

This strength was put to the test when Jujimufu took to his first full powerlifting meet over the weekend. He competed once in 2018, doing a deadlift only event. However this time he took the stage at the Hybrid Showdown II powerlifting meet, doing all three lifts. Going 8/9 on his lifts, he scored 3rd place, by hitting a 1736.1lb total. He did this with a 666.9lb squat, 402.3lb bench, and 666.9lb deadlift, all with an injured arm!

It was a great showing from Jujimufu, making him feel accomplished. Nevertheless he did not stop there, as he was back in the gym again. In a post to his Instagram, Call shows that he is back to training, working on his front squat. He was still feeling the effects of competition though, as he was able to hit a 520lb lift, setting a new personal record.

“FRONT SQUAT PR! 520 lbs (236 kgs). Have not done this lift in 2 months and this is a 70 lb PR! I got some carryover gains from all the backsquat training I did for the powerlifting meet I just completed. COOL!!!!!!”

What is the most impressive thing about this lift from Jujimufu, is the fact that this was an exercise that he had not done in months. Although he attributes this to carryover gains from the meet, that surely is not the only reason. He has been working super hard lately, and that increase in overall strength is also a contributing factor to this hefty lift.

It will be exciting to see if Jujimufu continues to compete in powerlifting. He performed valiantly in his first efforts, so hopefully, he keeps at it.