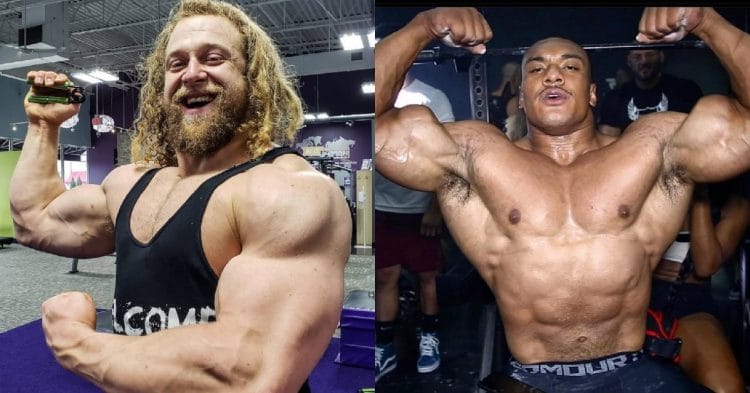 Jujimufu likes to try his hand at all kinds of different fitness challenges. Now he is preparing for an arm wrestling match against powerlifting phenom Larry Wheels, and he knows just how to win.

One of the most popular fitness stars on YouTube, Jujimufu has garnered quite the following over the years. People are attracted to watching him do a variety of different sports activities, from gymnastics to powerlifting. Not to mention the insane challenges he likes to try from time to time.

The most recent endeavor sees Jujimufu putting his arm-wrestling skills to the test. His opponent is Larry Wheels, the powerlifting phenom, who also has some experience with arm wrestling. A lot of experience actually, taking on some of the best in the world.

This is something that Jujimufu recognizes in his training for this challenge, so he has been trying to figure out the best ways to beat Larry. In a recent video to his YouTube channel, he gives an idea of the training he is doing, and what he plans to do to best Larry Wheels. According to Juji and his partner Tom, the area that Larry is lacking in, is his actual strength while arm wrestling.

“That’s how you beat Larry, you’ve just got to be stronger than him. I have time to do that, I just have to get stronger before the Bottom 8, so I can outstrength him. I’m going to avoid going to straps, chalk up a lot, and beat him on hand control.”

So then Juji gets to work on getting stronger, so he can beat Larry. First they start off with some trap bar deadlifts, with the goal to lift more than they think Larry can. Then they move to the arm wrestling station, where they work on various tactics to get the win, before using the Grip Genie to build the type of strength needed for arm wrestling.

Jujimufu and Tom finish up by doing different things, with Juji focused on barbell curls. Tom, on the other hand, concluded by doing some cable pulldowns. They then recover by going from an ice bath to the hot tub, and back.

It was a pretty solid workout session from Jujimufu. He explained that this video was recorded before the global health crisis, and the contest has since been postponed. However when the event does take place, it will be fascinating to see who can win.

As one of the fiercest powerlifting competitors, Larry Wheels is known for pushing the limits of human strength. Wheels recently...