Julius Maddox is closer than ever to landing his 800lb bench press as he hit 771lb in training, which is his heaviest raw bench to date 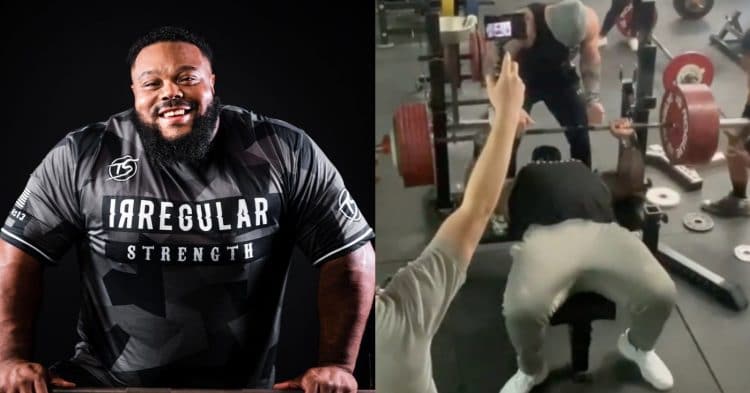 It seems like Julius Maddox has been on the road to an 800lb bench press forever. However he has gotten closer than ever before, with a massive performance in the training room recently.

Nobody has ever been able to bench 800lb before, and if there is anyone who can do it, it is Maddox. He has been directly working towards this goal for more than a year, getting closer and closer to the mark.

He even had an attempt at the 800lb bench press in a highly publicized event last year. Unfortunately through a misloading error, Julius suffered a minor injury that forced him to be unable to make the 800lb attempt.

Since then, Julius has been slowly rebuilding himself and getting back to the point where he can try again. He has been sharing all kinds of training updates that show where he is in that pursuit, and it is safe to say he is getting close.

If you are not already convinced of how close Julius Maddox is to 800lb, he had another recent training session that may convince you. Taking to Instagram, he showed off the 771lb raw bench press that he did in the gym, and it is incredible.

Now there is a lot to be impressed by, with this performance out of Maddox. Not only is this less than 30lb away from his goal, but it is also the heaviest raw bench press we have ever seen.

Julius already holds the ATWR for the bench press, at 770lb, but this performance was heavier than that, albeit in training. It just goes to show how the training is paying off.

He says he needs to clean some things up, and that likely refers to the control over the weight. With that in mind, it is worth noting that this was still more steady than the 750lb press he did a few days earlier, another sign of his skills improving.

It looks like Julius Maddox is set to make his second attempt at an 800lb bench press on June 10th. With the rapid speed at which he is improving, it would not be surprising if he tried to go even heavier than that.

Things have been clicking on a different level than his previous attempt at 800lb, and it seems that he is not letting anything get in his way this time around.