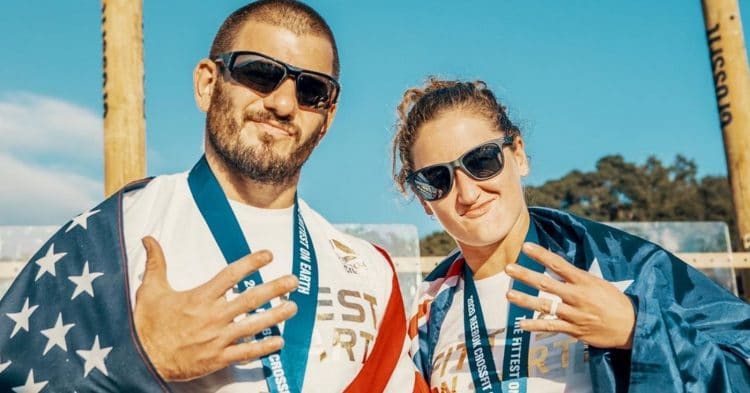 Yesterday, five-time CrossFit Games Fittest Man on Earth® winner Mat Fraser took to Instagram to post his official retirement from the CrossFit Games. It did not take long for his CrossFit training partner, four-time Fittest Woman on Earth® Tia-Clair Toomey to hit Instagram with a post for Mat, congratulating him on retirement.

Tia-Clair is Proud of Mat Fraser

It was yesterday when we reported that Mat Fraser was retiring from the Games. Shortly after his Instagram post, friend and training partner Tia-Clair Toomey posted her thoughts to a CrossFit community that was already reeling from the news of Fraser’s retirement.

“I’m so proud of this guy! @mathewfras

Over the last 2 years I had the privilege of training every single day with him. We went through so much both physically and mentally and I couldn’t have asked for a better training partner.

Our days considered of reading @shaneorr01 program ( @prvnfitness ), looking at each other, wondering if that’s even possible and going through the training that helped us achieve our goals of becoming the most dominant athletes, Crossfit has ever seen.

As sad as it is seeing Mat turn a page in his life and start a new chapter, I couldn’t be anymore happier for him and his family. I’m so excited to see what the future holds for him and I now have a brother I can support for the rest of my life. #PRVN

The fans tried to be polite while noting some sadness. Others are hoping the same news for Toomey isn’t going to be following any time soon before the 2021 CrossFit Games.”

Tia received some love and support as well, with some fans nodding to her as an absolute champion, just like Fraser.

Tia-Clair Toomey has not announced if she will be in the CrossFit Open this year. But last year when she said she was moving to train for the Australian women’s bobsled team, she told her fans she was working hard to make sure the move didn’t shake up her CrossFit training schedule.

When she comes back to CrossFit, this could be the year Tia matches Fraser title for title, and becomes the five-time Fittest Woman on Earth®.

This is a partnership that is as iconic in the sport as both of the athletes themselves.

It will take several years for any athlete to beat either of them. They both are among the most decorated in CrossFit Games history.

Between them, the training partners have seven gold and four silver medals. This means that neither of them have slipped below the number two spot in the CrossFit Games at any point in their careers.

Fans and fellow athletes identify the sport with them by name, almost. For one of them to retire, is huge news that is rocking the CrossFit community. Fans are sad to see Fraser go, while fellow athletes are wondering if this will give them a better shot at the CrossFit Games Finals this year.

One thing is for sure. The Fittest Man on Earth title is up for grabs this year to anybody, and whoever wins it won’t have the stress of having to beat five-time winner Mat Fraser to do it. For some, it could be the most exciting Games yet for the men’s division.

For others, it’s a sad day to see a legend leave the comp floor. How Tia-Clair Toomey feels about it personally is unclear, but she’s proud of the training partner she has had for the past two years. She and Fraser have worked alongside each other with coach Shane Orr, Toomey’s husband, for the past two years.

This year, Tia-Clair is training alone, while still alongside her coach husband Shane Orr.

Tia-Clair Toomey came into CrossFit the same year that Fraser did in 2013. She entered the sport with running skills that appear to be superior to actual superheroes. Combining that with her weightlifting talents make her an easy win for the multi-disciplinary sport of CrossFit.

In addition to her CrossFit golds, she has the gold from the 2018 Commonwealth Games for weightlifting for Australia in the 58kg/128lb weight class. She took that skill and that win into the 2016 Rio Summer Olympics and placed fourteenth in the world.

In 2015 and 2016 she was the runner-up for the Fittest Woman on Earth® title in the CrossFit Games. But she has been taking the gold home since 2017.

She is currently training in South Korea for her next Olympic attempt, but this time with the Australian Women’s bobsled team. We hope to see her on the CrossFit Games floor this year and will keep you posted with every Toomey development that crops up.