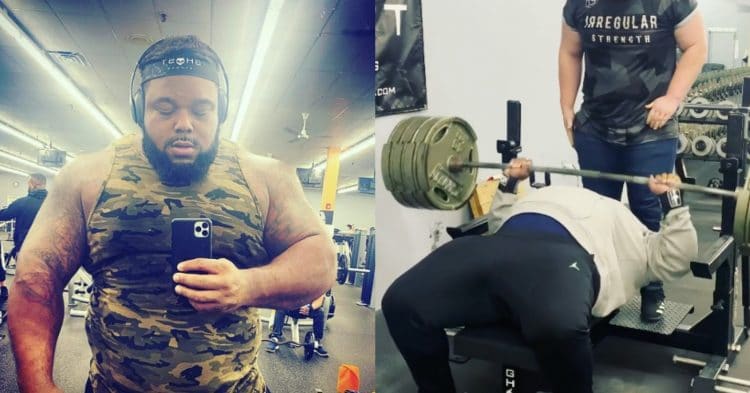 Powerlifter Julius Maddox has been working to climb the mountain back to an 800lb bench press. He took a massive step in the right direction recently, while scoring a new personal record in the process.

The last several months have seen Maddox reach the highest of highs and the lowest of lows. He had geared up to do the biggest bench press of all time, with an astounding 800lb on the bar, and looked ready to do so.

Unfortunately when it came time for the world record attempt, disaster struck in a big way. A misloading accident led to Julius getting mildly injured, and unable to successfully score the new record.

However Julius Maddox is not letting this setback get to him, as he has been working to get back to that point. He is regularly sharing insane videos of him doing crazy rep training, on the road back to 800lb.

Most recently that hard work paid off, as Maddox was able to score a new rep PR. Taking to his Instagram, the Kentucky native shared a video of him benching a solid 710lb for a triple, to score the new personal record.

That was a strong performance from Maddox, and one that went so smoothly that you would never guess it to be a PR. Then again, this is on par with the expectations of this incredibly talented athlete.

Things have been heading in the right direction for Julius over the last few weeks, too. He is planning to make a second attempt at the 800lb bench press later this year, and has been grinding his way towards that goal.

This massive triple was heading in the right direction, but this was not his only strong showing. A few weeks earlier, he was seen scoring a hefty 725lb paused single, looking great along the way.

At this point, Maddox has not revealed exactly when he plans on giving his next attempt at this massive world record. That being said, it appears he is pulling out all stops in his training, and will be fully prepared this time.

The way the first attempt went down was extremely unfortunate. However if you can take a positive away from it, you can say that it has given him the chance to improve and level up his game even more.

Whenever Julius Maddox puts 800lb on the barbell, the world will be watching. If anybody can hit this mark, it would definitely have to be him.