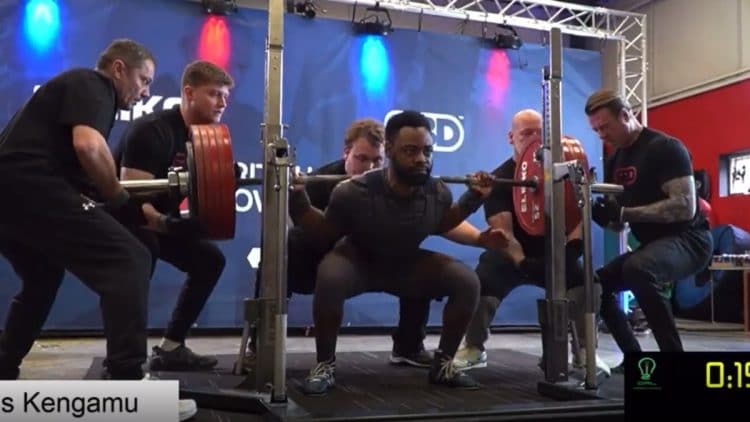 Jurins Kengamu is setting the table for possibly his greatest year since starting powerlifting. He took part in the 2022 British Powerlifting (BP) British Men’s Classic Championships, which took place on March 12-13, 2022, in Colchester, England. Jurins was one of the standout athletes of the competition, as he managed to set new British Squat and Total Records in the 83 kg weight class.

Jurins Kengamu started the competition extremely well, as the squat was the first event. He impressed everyone by squatting 295.5 kg (651.5 lbs). With this lift, Jurins improved the previous British Record, which was also held by him, as he squatted 292.5 kg (645 lbs) at the 2021 BP British Open Classic. His recent squat would also be the Second-Heaviest in the IPF, if it was done in a competition sanctioned by them.

Jurins Kengamu also set a new British Total Record of 788 kg (1737.2 lbs). Like the squat, Jurins also held the previous record, having totaled 777.5 kg (1714 lbs) at the 2021 EPF European Classic Powerlifting Championships. However, his recent total is much heavier and proves how much improvement Jurins has made in just a few months.

Jurins Kengamu’s bodyweight at the time of the competition was 82.20 kg (181.2 lbs), and his total earned him a score of 109.62 IPF GL Points. He is now sitting in second place of the All-Time British Powerlifting Rankings, regardless of the weight class.

All of his competition PRs came from the 2022 British National Championships, and he definitely aims to achieve some outstanding success this year.

The 2022 IPF World Championships will be very challenging for Jurins, as he is in the same weight class as Russel Orhii. However, following his recent performance, a podium finish could be a very realistic goal for him. Jurins has made significant progress in a very short timeframe, and he has a few more months to try to further improve.