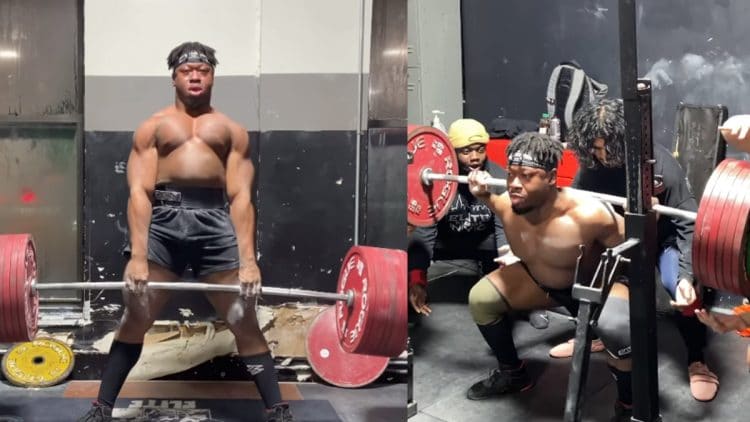 Powerlifter Bobb Matthews is already marching towards his first World Record, despite competing for only two years. Matthews competes as a drug tested lifter and usually takes part in the 93 kg category, but he moved up to the 100 kg category, and it is doing wonders for him. On February 27th, 2022, Bobb Matthews posted a massive training Total of 945 kg (2083.4 lbs) PR, which is unofficially the All-Time Second-Heaviest Tested Total in his category.

Matthews notched the Total with a humongous Squat of 345 kg (760.6 lbs), which is also the All-Time Second-Heaviest Tested Squat in the 100 kg category. He only used a lifting belt and knee sleeves to aid him in the lift, and it was smooth like butter.

He continued cruising towards a massive total with a 227.5 kg (501.6 lbs) bench press. Matthews did not use any equipment, but it definitely seemed like it was his max.

Ashton Rouska also holds the squat World Record, which Bobb Matthews will chase in the future. Ashton squatted 363 kg (800 lbs), and he set it at the 2021 USAPL Texas Strength Classic.

All the lifts done in this total are Bobb Matthews’ new training PRs. Furthermore, both the squat and bench are 15 kg (33 lbs) heavier than his official PR.

All of his competition PRs were set at the 2021 USAPL Virginia Pro.

Bobb Matthews was born in 1997, so he is still a young athlete with a lot of potential. Matthews only took part in 5 sanctioned competitions until now, and has never won. However, this year looks very good for him, as he will probably get his first win, and potentially break a World Record. He only needs to add 5.5 kg across three different lifts, and that sounds very doable. We do not know when Matthews will compete, but it will be interesting to see what he does in his next competition.