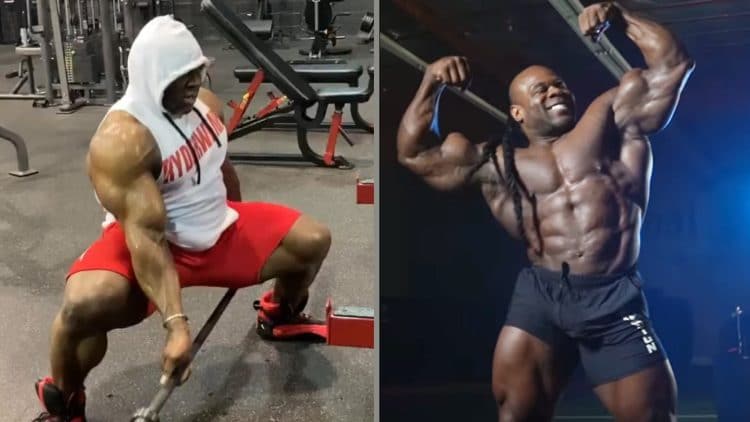 Kai Greene and his monstrous build have seen the Mr. Olympia podium many times despite never taking home gold. The bodybuilding legend recently took to Instagram and showed off a video of him getting down with some Jefferson squats.

Kai Greene is one of the most competitive bodybuilders to ever take the stage. Throughout his storied career, Greene picked up many major titles but the legend struggled to secure gold at Mr. Olympia — the biggest bodybuilding show on earth. Nevertheless, his vascularity and all-around mass have made him a star in the world of bodybuilding. Greene is not officially retired and continues to give back to the community with a variety of unique workouts.

On Jan. 7, 2022, Greene shared some videos on Instagram. Immediately fans and pundits wondered if Kai Greene indeed went through a recent downsizing. The social media share in question raises concerns because his lack of muscularity suggests the legend could be contemplating retirement from competition soon.

Greene won the 2016 Arnold Classic Brazil and has managed to maintain an incredible physicality years after the victory. Perhaps one secret to Greene’s muscled build is hitting Jefferson squats during training sessions. While the technique might look awkward in appearance, Kai Greene swears by it and the results are hard to argue with considering the decorated bodybuilder’s massive physique.

Kai Greene is pretty active on social media. The bodybuilding legend explains that Jefferson squats are more than just an awkward-looking exercise. In fact, Greene maintains that it’s one of the best workouts for activating the glutes, hamstrings, and quads simultaneously.

Recently, Kai Greene showed off the workout routine on social media and advocated for its benefits.

“A secret of mine that you don’t see many people do anymore is the Jefferson Squat. It works your lower body in a unique way, to perform this movement take a wide stance and hold the bar between your legs with one hand in front of your body and one hand behind it.

Keep your glutes tensed while you squat down in the bucket (below parallel).

Use smaller plates on the bar, no more than 25s, so you can get down deep enough.

The key is to force your knees out—when you do that, it activates your glutes so you keep them under continuous contraction throughout the set.

The better I became at doing Jeffersons, the more proficient I got at squatting. I learned how to activate my qlutes, hams, and quads better. Doing Jeffersons then the adduction machine one after the other has been crucial to my glute and hip-flexor development.

Give it a try and let me know what you think 👊🏾” Kai Greene shared.

The legendary bodybuilder admits that using smaller weights for this exercise is actually more helpful. The focal point of the activity is to draw a contraction from the glutes, hamstrings, and quads. Kai Greene is adamant that these exercises have been a crucial part in the development of his glutes and hip flexor.

As shown above, Greene was an extremely active competitor. With multiple podium appearances at some of the highest-profile shows around, fellow cohorts knew that if Greene was in the mix, the competition would be that much more difficult to secure gold at.

Greene is still making the most of his time despite not being an active competitor in sanctioned bodybuilding shows. After his latest share of a vigorous Jefferson squat routine, it appears Kai Greene still has the same drive that saw him become a 3X Arnold Classic winner.