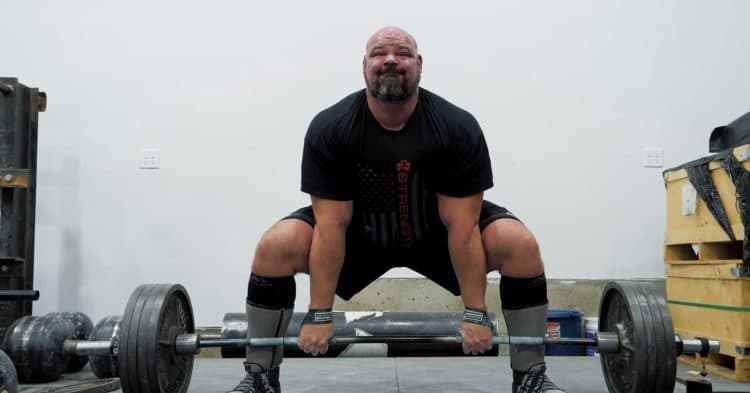 Strongman Brian Shaw recently shared a sumo deadlift workout video. Shaw is a four-time World’s Strongest Man and is currently preparing for the 2022 WSM to attempt a record fifth win at the competition.

Brian Shaw shared the sumo deadlift workout from the Mountain gym and stated that it will be preceded by a readiness warm-up workout. These were high-rep workouts that Shaw had to go through within 15 minutes.

“We’re gonna jump into the sumo deadlift. We got some accessory work, we got some farmers (walk) today. So really an all-around training session…” Brian Shaw said.

Brian Shaw explained that the load-bearing leg and hand would be on the same side for the single-leg RDLs. Before jumping into sumo deadlifts, Shaw went through four rounds of this readiness warm-up workout.

Shaw’s new coach Joe Kenn mixing up things in Shaw’s programming in the hope of his chances of winning the 2022 WSM title for the fifth time to tie Mariusz Pudzianowski, the only athlete who holds five WSM titles.

Joe Kenn observed Brian Shaw on a Facetime call as he performed sumo deadlift. After a few reps, Kenn gave a few tips to Shaw and said:

“Do not get in that mindset of I’ve got to get my chest up, you’re fine. That’s hard man. That is a hard thing to learn in four weeks in an eight-week faith. But that again, hopefully by me being live today, your partners can hear what I’m saying. So they can get an idea of what cues to say the same terms,” Joe Kenn said.

Brian Shaw next performed a sumo deadlift set of 20 reps. The efforts he put in it were immediately visible as a puddle of sweat formed on the floor where he was deadlifting. Following the workout, Brian Shaw said:

“This is very much about the hip position and hip hinge to start that lift. So still something that I’ve got to get dialed in. But the end goal is to improve at the world’s strongest man. So, it’s not necessarily about being the best sumo deadlifter because obviously, you cannot do sumo deadlift in a strongman competition, at least. But as a training modality, it has benefit, it has carryover and that’s what it’s all about.”

After the sumo deadlift, Brian Shaw went on to do power running and explained that single arm and single leg work is very important to him. Shaw concluded the workout with Farmer’s Walk. He explained that the diameter of the implement helps in developing grip strength.

Brian Shaw is one of the most accomplished athletes in the strongman sport’s history. After an impressive 8-year run at WSM from 2009 to 2018 that included four wins, a runner-up finish, and four top-three finishes, Shaw finished out of the top four for the first time in his career in 2019 and 2020. However, he made some solid improvements to his game and gave Tom Stoltman a run for his money at the 2021 World’s Strongest Man, finishing second.

Shaw last competed at the inaugural strongman competition at the 2021 Rogue Invitational.  Unfortunately, he finished seventh due to a hamstring injury. He received A2M treatment for the same and will make his comeback at the 2022 World’s Strongest Man. However, looking at his resurgence in 2021, it is certain that other competitors will have a tough time getting past him.