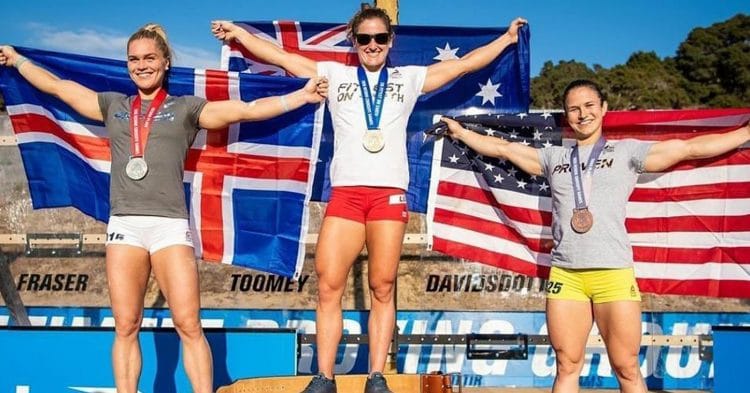 Kari Pearce from the United States was determined to make it to the podium for the 2020 Reebok CrossFit Games, and she did. She took the number three spot on the podium, a ranking that does not reflect how she became Atalanta in the Games. She earned the spot by crushing 9 competitors in the final event for the 2020 CrossFit Games finals.

Even Mat Fraser, who made his own history with his fifth consecutive Fittest Man on Earth® title, has to give this lady some respect. She beat him. And that’s the story that Kari Pearce can tell her loved ones and fans today.

For the men, Mat Fraser crushed that event, but he still couldn’t do better than Kari.

She continued her personal best streak by making it to the podium of the 2020 Reebok CrossFit Games, a podium landing that is her first. By so doing, she broke the barrier of the infamous women’s podium draws for the CrossFit Games.

Kari Pearce even looks a little bit like the mythological creature known as Atalanta. That may be why she crushed all nine contenders behind her. And she made it look so easy.

It was the story behind this mythological creature we call Atalanta that inspired Dave Castro to design an event that would one day be called the toughest event in CrossFit Games history.

From Greek mythology, the story goes that Atalanta lived an existence of tribulations and war. She is thinking with depth and armed with arrows for any opponent that comes her way.

What Atalanta doesn’t know is that she is going to defeat the best in the world. After being left on top of a mountain to die, she was saved but refused to marry her hero until he beat her in a foot race. She proclaimed she would only love someone who could best her in a foot race.

In the end, all would fall behind Atalanta, and her story of tragedy would continue as she would never be able to find the one great love that could beat her in a foot race. But that was okay for her. It was a warrior for her or nobody, and while staying armed, she proved her worth to the gods as a force to be reckoned with.

This hill top was the inspiration behind the Atalanta event which included a one-mile run, 100 handstand push-ups, 200 single-leg squats, 300 pull-ups, and a one-mile run to conclude. The women wore a 14-pound vest and the men wore a 20-pound vest.

At the beginning of the event, Kari Pearce was not the expected win, as she was over-run by Haley Adams after the opening bell. Kari paced herself, however, and in so doing, she made it to the podium.

She had to beat two ranks in the event to get there. And she did. Her squats held 50-reps ahead of the rest, and it was a lead she maintained until the end.

Mat Fraser took the first in the men’s division, and he held a pace with his training partner Tia-Clair Toomey throughout the event.

Katrin Tanja Davidsdottir was holding the lead during the 300 pull-ups with a lead of 10 pull-ups. But it wasn’t enough for the first in this event as Pearce bolted to the finish line to become this year’s Atalanta.

In the end, Kari Pearce took the W, Katrin Tanja Davidsdottir came in second by just over a minute longer. Toomey placed third in the event by being almost three full minutes slower than Pearce.

Noah Ohlsen was just less than a full minute behind Fraser, came in at second spot in that event, while Justin ends up third and Samuel Kwant was the last to arrive at the finish line.

Mat Fraser and Tia-Clair Toomey kept their Fittest on Earth® titles, while Noah Ohlsen slipped off the podium after what appeared to be a grueling weekend for him. Ohlsen was the expected second-place winner, some may have lost some money there.

Second and third place for the men went to Samuel Kwant and Justin Medeiros respectively, while Katrin Tanja Davidsdottir took the second place spot just ahead of third-place Kari Pearce.

A Head by Head Guide to Deltoid Training

The 2022 CrossFit Semifinals have started, and some athletes have had a remarkable start. Although the Semifinals consist of 10...

The reigning 5x Fittest Woman on Earth®, Tia-Clair Toomey, had the honor to announce the first Open Workout of the...

The 5x Fittest Woman On Earth®,Tia-Clair Toomey is one of the central athletes for the 2022 CrossFit Season, as she will...