Discover the training and diet that NBA superstar Kevin Durant follows to stay at the top of his game. 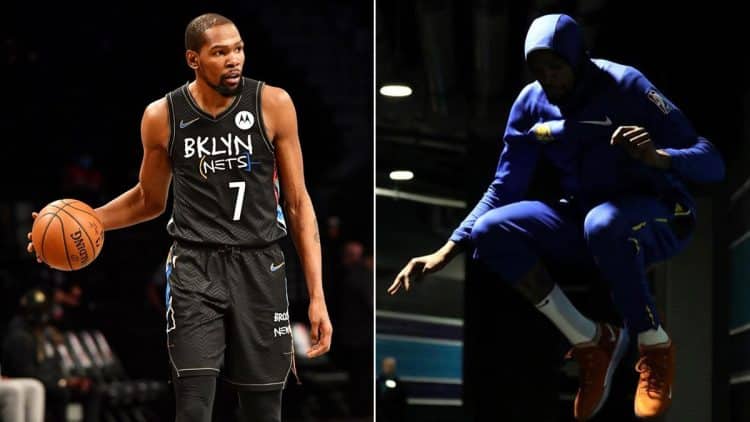 Kevin Durant is one of the biggest stars in the NBA. The 6’9” Brooklyn Nets power forward has a God-given gift on the court, but he works extremely hard to make the most of it. Kevin is known for the length and intensity of his workouts; and his disciplined eating plan.

In this article, we break down Kevin Durant’s workout, supplement, and diet routine so you can see what it takes to stay at the top of the NBA roster.

Kevin Wayne Durant was born on Sept. 29, 1988, in Washington, D.C. His father abandoned the family when he was a baby and Kevin was raised by his mother and grandmother. He has a sister and two brothers.

Kevin was raised in Prince George’s County, Maryland, on the outskirts of Washington, D.C. By the age of 12, he was already 6 feet tall and in love with basketball. His favorite team was the Toronto Raptors, and his idol was Vince Carter. Kevin played for a number of AAU teams in the Maryland area. By his senior year at high school, he had grown to 6’7”.

At the end of his senior year, Kevin was named the Washington Post All-Met basketball player of the year and the MVP of the 2006 McDonald’s All-American game. By the beginning of the 2006-07 college season, he had grown to 6’9″. He played for the Texas Longhorns, averaging 25.8 points, 11.1 rebounds, and 1.3 assists per game.

In 2007, Kevin was selected by the Seattle Supersonics as the second overall pick in the NBA draft. He was named NBA Rookie of the year, becoming one of only three teenagers to average 20 points per game over the entire season in the history of the NBA.

Kevin was selected for his first NBA All-Star game during the 2009-10 season. He appeared in his first NBA finals in 2012, where his team lost to the Miami Heat. In 2016, Durant signed with the Golden State Warriors. He suffered a tibial bone bruise during the 2017 season, which took him out for the final 19 games of the season. However, he returned in time for the NBA playoffs, taking the Golden State Warriors all the way to the championship. He was subsequently named NBA finals MVP.

Following the NBA finals, Kevin became an unrestricted free agent. He re-signed with the Warriors and took them to a second straight championship. In 2018, he again re-signed with the team, intent on taking them to a threepeat. They made it all the way to the finals but lost to the Toronto Raptors.

In 2019, Durant signed with the Brooklyn Nets but ended up sitting out the entire 2019–20 season. As a result, he didn’t make his debut for the Nets until Dec. 22, 2020. The following February, he suffered a hamstring injury that forced him to miss the next 23 games.

In June 2022, Durant reportedly requested a trade from the Brooklyn Nets.

Must Read: The Ultimate Basketball Workout and Diet Plan For Athletes

Kevin Durant’s workout program features a five-tiered approach. He is in the gym doing strength training with a focus on the lower body. He also follows an agility routine to develop the ability to make quick transitions and to improve his on-court maneuverability. Then there’s a short three-exercise mobility drill that he does almost every day.

Kevin also does plenty of cardio, including sprints, suicide drills, HIIT workouts, and running on sand.

Finally, he supplements his workouts with shooting drills.

Throughout his career, Kevin has developed a reputation for spending lots of time training, both in and out of the gym. He has said:

“I was always in the gym. People would look at me crazy because I spent so much time there. But that’s what it was about. I’m glad I did it.”

Here is what the NBA star’s training regimen looks like:

Kevin will do this workout twice per week, with at least two days of rest between sessions.

Kevin will do this strength training twice per week, usually on Mondays and Fridays. These workouts usually take place around 10 am.

Kevin Durant knows that the quality of his performance on the court and the intensity of his workouts in the gym are totally dependent on his diet. As a result, he keeps a careful watch on what he eats. He is fortunate enough to be able to afford a full-time chef, Ryan Lopez, who prepares delicious and nutritious meals for him.

In an interview with ESPN, Kevin said:

“In order for me to perform the way I will perform, I need some good energy, and [Lopez] provides that for me.”

Ryan Lopez has also been interviewed about the meals he prepares for Kevin. He stated:

“I need to make sure he is fueled for the game .. . As a trained chef,  it needs to be healthy, but I make sure it tastes good, too.”

Kevin’s diet features fish quite prominently. That’s because it is light and easy to digest while also packing protein, energy-giving nutrients, and omega-three fatty acids. Lopez serves Kevin seafood at least six times a week. Servings are usually eight ounces, with some of Kevin’s favorites being salmon, shrimp, seabass, and scallops. Lopez also serves him plenty of fresh fruits and vegetables.

Kevin’s all-time favorite fish is seabass. In the interview with ESPN, he said:

“I fell in love with seabass when [Lopez] started cooking for me. That’s like the one thing I have to have all the time.”

When Kevin has been out with an injury, Lopez makes sure that he increases the amount of omega-three fatty acids in order to lessen inflammation. At times, he has even had Kevin supplement with fish oil for this purpose.

Here is what a typical day’s worth of eating looks like for Kevin Durant:

Kevin Durant is not big on taking supplements. He believes that as long as he follows a healthy whole food diet, he can get all the nutrition he needs for optimal functioning. He does, however, rely on two supplements:

Fish oil provides Kevin with extra fortification to his immunity and helps offset inflammation that comes from the demands he puts on his body on the basketball court. He increases his fish oil consumption if he suffers an injury.

Kevin takes a whey isolate protein shake after his workouts to help preserve and build muscle tissue and strength.

Kevin Durant is one of the most successful professional athletes of our generation. On top of his natural talent, he puts in a lot of hard work and discipline to stay at the top of his game. We hope that this insight into Kevin’s training and diet inspires you to work towards achieving your goals.