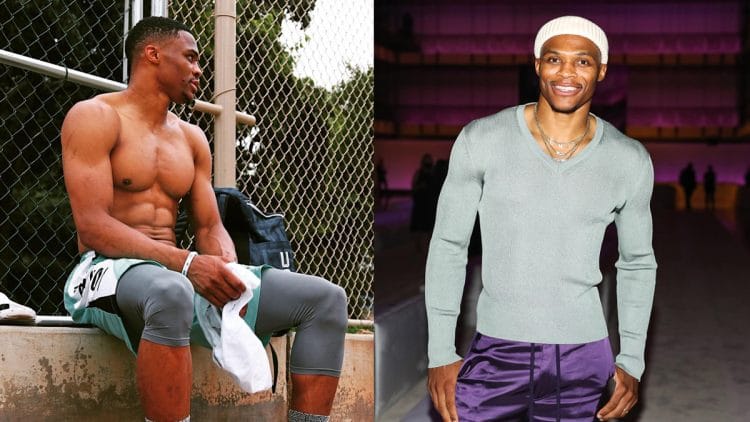 Russell Westbrook III is an American professional basketball player for the Los Angeles Lakers. Westbrook is a nine-time NBA All-Star and earned the NBA Most Valuable Player Award for the 2016–17 season.

All of this sounds like a fairytale considering Westbrook was a late bloomer. The NBA star entered high school at 5’8″ tall and weighed only 140 pounds. He played point guard and only made the varsity basketball team as a junior.

Russell Westbrook is no ordinary basketball player. In 2020–21, Westbrook averaged a triple-double for the fourth time in five seasons, and he passed Oscar Robertson for the most career triple-doubles in NBA history. Not only does achieving this feat require a boatload of talent, but also a peak level of fitness.

Thanks to his dialed-in diet and training program, Brooks spends more than 35 minutes on the court on average in a game. It is bad news for his opponents as every minute Russell Westbrook spends on the court, he is taking the game away from them.

Westbrook is one of the most shredded NBA players of all time. The NBA MVP trains for speed, strength, endurance, agility, and explosiveness, making him one of the fastest players on the court.

“He is the (Mike) Tyson of basketball,” NBA legend Jason Kidd once told ESPN of Westbrook. “When the bell rings, he’s coming for you. Whenever he’s on the floor, he plays at one speed, and that’s fast and hard.”

Westbrook realizes that his diet plan can make all the difference in his performance on the basketball court. He follows a personalized meal and supplement plan to improve his functionality and meet his daily calorie, macro, and micronutrient goals.

Note: The diet program laid down below is from Westbrook’s off-season. He cuts down on his calorie intake during the season as it can help improve his explosiveness and endurance.

Adhering to the following dieting principles make Russell Westbrook one of the most athletic and explosive NBA players of all time:

1. Make the Most of Carbs

Russell Westbrook is very particular about his carb intake. Not only does he focus on consuming high-quality carbs, but he also tries to time his carb intake for optimal results.

Westbrook consumes carbohydrates three times a day. He eats them for breakfast, pre, and post-workout to facilitate muscle growth, ensure he has enough fuel in the tank for his workouts, and so that he won’t store excess body fat.

Carbohydrates can be an effective source of energy for workouts, can help recover after a grueling workout, and blunt insulin levels when consumed first thing in the morning. (3)

Before you pick up the syringe, hear us out. This is not a call to inject yourself with foreign bodies in hopes of improving your physical performance.

Westbrook takes a very scientific approach to his diet. He is one of the few NBA athletes who monitors and times his carb intake. Additionally, he tracks his natural T-levels to improve his functionality.

Russell uses a natural testosterone-boosting supplement (with tested ingredients that are legal for NBA players) and combines it late at night with a slow-digesting form of protein (casein) to improve his test levels.

But why does he take a test-boosting supplement right before hitting the sack, you ask?

Your body produces testosterone late at night, and consuming the T-boosting pills with a slow-digesting protein source can help skyrocket your male hormone production, which in turn can improve your recovery.

3. Don’t Forget About the Antioxidants

While most fitness enthusiasts never think beyond macronutrients in their diet program, Westbrook takes a different approach. The NBA MVP supplements with a natural antioxidant to help improve his recovery.

Russell’s diet is packed with potent antioxidants to help him function at optimal levels. He snacks on Goji berries, drinks green tea, and season his food with turmeric.

Trivia: Russell Westbrook has a bizarre pre-game ritual. Before every game, Westbrook eats a peanut butter and strawberry jelly sandwich on toasted wheat bread, and it is always cut diagonally. Also, he hates lasagna and avoids shellfish due to an allergy.

The NBA star eats up to six meals a day. Eating small meals throughout the day ensures Westbrook’s metabolism is working at full capacity, and he is getting the required nutrients to function optimally throughout the day. Here is what Russell’s diet looks like:

If there is only one thing you could take away from this article, let it be this — when your wife makes a dish, you better eat it, even if you hate its guts.

Westbrook follows one of the most elaborate training programs to stay on top of his game. He does not restrict himself to one type of workout. Instead, the NBA star achieves his speed, agility, strength, and explosiveness through a combination of training protocols.

The NBA All-Star lifts weights and trains one muscle group a day. He also focuses on building core strength to boost his performance on the basketball court.

“I have fears, but I do not fear anything or anybody on the court.” — Russell Westbrook

Russell uses the following training principles to outdo his opponents on the court:

Westbrook adds diversity to his training with a combination of different workouts. He does a ton of basketball training and drills to improve his on-court skills and lifts weights and does bodyweight HIIT workouts to improve his strength, agility, and explosiveness.

The NBA All-Star makes it a point to stretch out before every workout as it reduces the chances of an injury. No matter how hard-pressed you are for time, you should never skip a warm-up. A typical warm-up routine should last between 5-10 minutes.

3. Do Not Exhaust Yourself

Before a game, Westbrook takes an hour-long nap. It helps him de-stress and gives his body enough time to rejuvenate.

You should sleep anywhere between 7-8 hours every night to ensure your muscles get ample time to recover from your training.

The dumbbell workout helps the NBA star build strength and a solid core. In his dumbbell workout, he does four different exercises with an average of four sets and eight reps.

This workout can be credited with helping Russell build his trademark explosiveness. It also helps in improving balance, stability, and stamina.

The NBA star also follows a weight and basketball training routine. It helps him build muscle mass and endurance while improving his basketball skills.

Note: Basketball Training is done for two hours on each workout day.

“I’m never satisfied. I’m always trying to get better and learn from my mistakes.” — Russell Westbrook on self-improvement

Westbrook uses the following supplements to function at optimal levels on and off the court:

Being a point guard is one of the most demanding positions, but Westbrook makes it look like a walk in the park. Russell Westbrook is an absolute machine on the basketball court, and his diet and diverse training program have a big role to play in it.

The NBA MVP’s fitness program might look a little overwhelming at first, but the results will be totally worth it. Also, don’t be surprised if you become a master at triple-doubles while following the program. Best of luck!