Discover the training and nutrition program that keeps Cam Newton at the top of his game and in super shape. 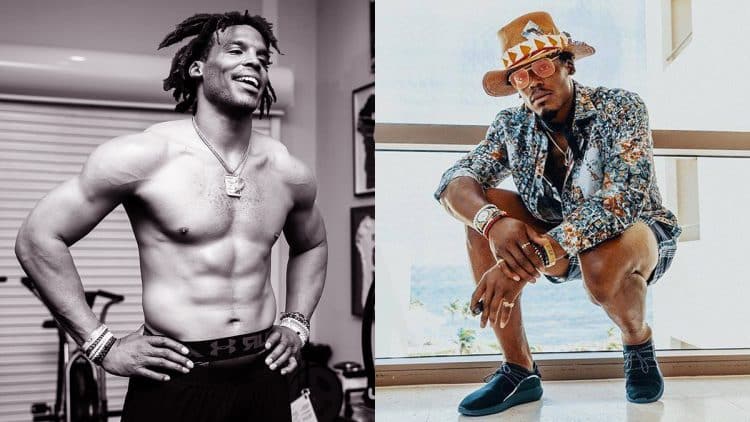 NFL Quarterback Cam Newton is one of the most impressive athletes in the league over the last couple of decades. Winner of the Heisman Trophy and Offensive Rookie of the Year Award, he has also built one of the more impressive physiques in the NFL.

In this article, we’ll explore the training regimen and nutrition plan ‘Super Cam’ follows to maintain his incredible skill set and amazing physique.

Cameron Jerrell Newton was born on May 11, 1989, in Atlanta, Georgia. His father, Cecil Newton, Senior, played in the NFL for Dallas Cowboys (1983) and the Buffalo Bills (1984). As a youth, Cam showed talent as a basketball and baseball player. He began playing football at Westlake High School. His talent won him a scholarship to the University of Florida. He went on to attend and play for Blinn and Auburn Universities, where he won the Heisman Trophy as the most outstanding player in college football in 2011.

Cam was drafted by the Carolina Panthers in the 2011 NFL draft and had an outstanding first season, winning the award for offensive rookie of the year. Between 2013 and 2017, Cam led the Panthers to three division titles and four playoff appearances. In 2015 he was named MVP.

Kam has four children with former girlfriend Kim Proctor. He had another child with an Instagram model in 2019.

As a professional athlete, Cam’s training covers all areas of strength, conditioning, and fitness, including cardio, core, strength, and agility training.

Cam Newton’s cardio training centers on either the treadmill or the air bike. Sessions last for an hour and begin with a 5-10 minute low-intensity warmup. He then performs high-intensity interval training (HIIT) cycles, consisting of 60 seconds of sprinting at maximum intensity and 60 seconds of recovery at about 30 percent of maximum speed.

Each HIIT cycle involves eight rounds of sprints and recoveries. After each cycle, Cam goes slow for three minutes to build up for the next cycle. Within an hour-long session, he will progress through four cycles of this workout.

Football involves quick bursts of energy followed by periods of active rest. To excel on the field, Cam needs speed, quickness, and agility. During the course of a game, he needs to accelerate, change direction with cuts and spins and rapidly decelerate.

Here is one of Cam’s favorite agility workouts:

Cam follows a split routine where he hits each body part once a week. He prefers to work a muscle group by itself. He typically does four to five sets per set, using a descending pyramid rep scheme in the 8 to 15 rep range.

On the first set, he will choose a weight that allows him to complete 15 reps, with the last two to three being challenging. After a 60 to 90-second rest, he’ll add weight to the bar and drop the reps to 12. Set three will see more weight added as the reps drop to 10. The same thing happens on the last two sets, so the last set will see him using a weight that will allow him to squeeze out just eight good reps.

Cam places a big emphasis on training his core. He knows that this is the foundation of power and agility. His core workout was designed by Carolina Panthers coaches Joe Kenn and Jason Benguche; he does this routine two to three times per week.

Cam Newton became a pescetarian in 2018. Pescetarians follow a vegetarian diet in addition to seafood. The word pescetarian is a combination of the Italian for fish ‘Pesce’ and vegetarian. He said he gave up eating meat to help his body better recover from football injuries.

In 2019, Cam gave up fish to become a strict vegetarian. As a result, he no longer eats fish, eggs, dairy, or meat and instead follows a strictly plant-based diet. When it became known that Cam had switched to a vegan diet, there was a backlash, with people saying he would lose strength and see a drop in his fitness levels. But Cam has squashed those claims, stating that he is able to get all the protein and other nutrients he needs by combining rice, peas, beans, and other vegetables.

Cam has previously revealed his favorite type of food is Chinese.

Here is what a typical day’s worth of eating looks like for Cam Newton:

Being a vegetarian, Cam makes smart use of supplements to ensure he is getting all the vitamins and minerals that his body requires. He also supplements to help supply the extra energy and focus he needs to train and perform at an elite professional level. Here is a rundown of the supplements that Cam regularly uses:

Cam Newton is an elite-level athlete with a lean and muscular athletic physique. In this article, we looked at the training and diet Cam follows to achieve his physique and performance.

Keep in mind that this is a heavy workload at a high intensity designed for a professional NFL athlete. Give it a try to see if you can handle the heat.