Kiera Aston also revealed that she aims to deadlift 300 kilograms (661.4 pounds) at an even lighter bodyweight. 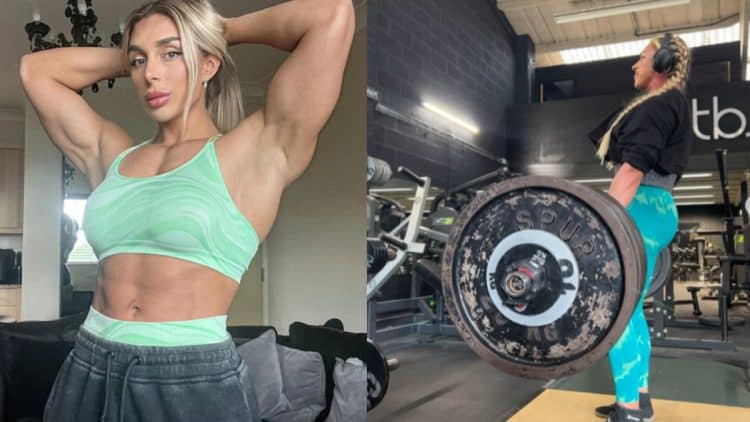 In the fitness industry, there have been many outstanding athletes, regardless of their physiques or strength. Rarely, however, do people excel at both bodybuilding and strength sports simultaneously. The first person that comes to mind is definitely Larry Wheels, but Kiera Aston is his female equivalent.

In addition to being an IFBB Pro bodybuilder, Kiera Aston is also an elite powerlifting athlete. While Kiera continues to work on improving her physique, it seems she is even more focused on gaining strength. There is no doubt that everything is going well since she just smashed her deadlift PR. Her new all-time best is now 275 kilograms (606.3 pounds), which is one of the heaviest women’s pulls in history.

Although Kiera Aston’s new deadlift PR was not raw, seeing that she used lifting straps, her bodyweight at the time of the lift is what makes up for it. She weighed in at 77 kilograms (169.8 pounds), which makes the lift 3.57x her bodyweight.

Aston has also revealed her future ambitions, which might seem impossible to some, but after her recent PR in the deadlift, it seems very possible. Kiera’s plan is to lose 2 kilograms (4.4 pounds) of bodyweight and then deadlift 300 kilograms (661.4 pounds).

Aston is also very open about her use of PEDs and frequently puts out updates. However, she has not used any of that since the beginning of July. She is making fantastic progress without using anything, so that is extremely impressive.

Kiera Aston has only competed in one sanctioned competition so far, so it’s not clear when she’ll compete again. It was the 2019 GPC-GB Bristol Qualifier, and here is how she performed:

Aston has stopped using PEDs, so she’s unlikely to compete in a bodybuilding contest anytime soon. In addition, she has obviously focused primarily on her strength and is certain of pulling 300 kilograms (661.4 pounds) at some point. In fact, she is already very close to achieving this objective, so it may occur sooner than expected.