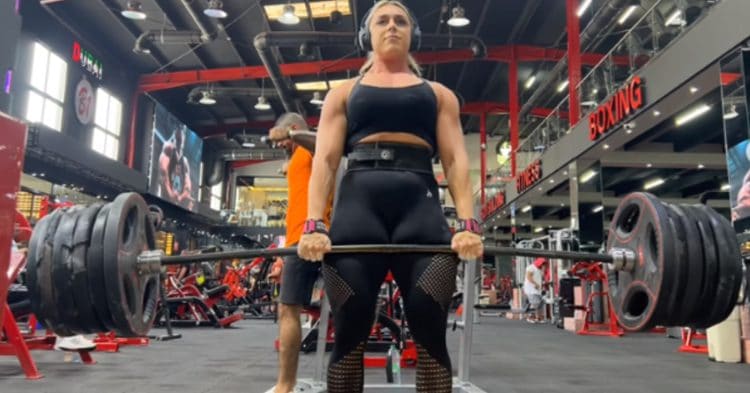 The IFBB Pro bodybuilder and a U75 kg powerlifter Kiera Aston, published some snippets of her deadlift session on her Instagram account, with the most impressive being her three reps with 247.5 kg (546 lbs). Kiera is famous for her deadlift abilities, so this is not the first time that Kiera deadlifts this much weight, but it is certainly very impressive.

Kiera published 3 sets of deadlifts, with the first one being 3x 247.5 kg (546 lbs), followed by the second set of 2 reps with the same weight. Furthermore, Kiera managed to deadlift 210 kg (463 lbs) for 8 reps. She used a lifting belt and lifting straps, with a conventional stance.

Related: Kiera Aston Annihilates 240kg Deadlift For 5 Reps Like It Is Nothing

Kiera pointed out in the comments that her current weight is 79.5 kg. This would mean that Kiera deadlifted just over 3x her bodyweight.

Kiera’s greatest achievement is becoming the youngest IFBB pro bodybuilder in Europe. She then discovered her potential in powerlifting and realized how strong she is. Not to be neglected, one of her biggest achievements is her 4-year body transformation, as she has made some tremendous progress after taking up bodybuilding and powerlifting.

You can see her transformation here:

Even some of the most famous fitness figures have recognized the strength that Kiera possesses, including one of the strongest people on earth, Larry Wheels. Larry featured Kiera on his YouTube channel, where they did a heavy squat session.

Kiera Aston is really a freak of nature, and excels in everything she decides to do. She is still very young and further improvement is almost guaranteed. Kiera revealed that she is planning to come down to 75 kg bodyweight for a powerlifting competition, but she did not reveal the name of the competition. It’s unclear when she will be stepping on stage next for the bodybuilding competition.