Larry Wheels gave fans and followers a demonstration of his strength after coming off a cycle using only TRT. 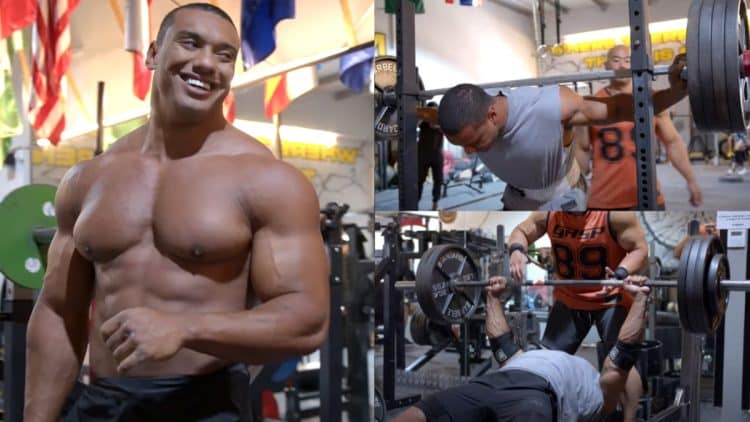 Larry Wheels is one of the most recognizable powerlifters in the sport and decided to test his strength after coming off his latest cycle. In a recent YouTube video, Wheels showcased his squat and bench press strength after switching to 175 milligrams of TRT (testosterone replacement therapy) a week.

In addition to his expertise in powerlifting, Wheels doesn’t shy away from new challenges and has even tested the waters competing in strongman. However, he was forced to withdraw his name from the upcoming 2022 Middle East’s Strongest Man contest following a back injury.

In sports like bodybuilding, strongman, and powerlifting, performance-enhancing drugs come with the territory. Larry Wheels knows this all too well and shared his experiences taking Trenbolone recently. He made headlines after describing the popular compound as a ‘living hell.’ Following his experiences with Trenbolone, Wheels advised his followers that it was the worst steroid he’s ever taken.

Last week, Wheels decided to stop all cycles to preserve his health and mentioned that he would only be taking TRT moving forward. After using TRT for a month, Wheels showed off a lean ripped physique. The changes to his physique were apparent, but now Wheels wants to test his strength since stopping all gear.

In his latest YouTube video, Wheels discussed his strength since stopping all steroids. He added that he’s already tested his deadlift, which he believes is around 80 percent of what his max was while using gear.

“Today, I’m going to be testing what my training max is for the next 12 weeks. So, as I mentioned in my previous video, I’m on 175 milligrams of TRT (testosterone replacement therapy) per week and I want to see what I’m capable of prepping on this. That’s what we’re here to do today. I’ve already tested my deadlift, which is at 80 percent of my max. I did 660 [pounds] for three reps,” says Larry Wheels.

Working with coach John Gaglione, Wheels wants to establish a baseline of weight in order to plan his next 12 weeks of lifting.

“I’m going to do the warmups and see how they feel. Work up to 75 or 80 percent. I’m assuming at this very moment — it is somewhere around 700ish, low 700s. So, I’ll be basing my 80 percent off of that. Then, I’ll be working with John Gaglione to build my training for the next 12 weeks. Really excited to see what I’m capable of on 175 a week on legit TRT doses,” Larry Wheels explained.

Before starting the training session, Larry Wheels revealed that he lost 4 kilograms (8.8 pounds) since stopping his cycle and using only TRT.

He kicks off the workout starting with a 25-kilogram (55.1-pound) squat. Larry’s coach, John, shared that he doesn’t like to squat until he’s practiced leg extensions.

“The pump I got while I was full blast is night and day compared to the pump I get now [on TRT]. It’s hard to even call it a pump on TRT,” Larry explained.

While Larry admitted pumps are more difficult to achieve without a cycle, he mentioned that his stamina is ‘so much better’ now.

Wheels opted to increase the weight to 129.3 kilograms (285.1 pounds) for his next test of strength and followed it up with another few squat reps of 147.5 kilograms (325.1 pounds). In the next round, Larry and his coach fired off squat reps amounting to 170 kilograms (375.1 pounds).

Following a brief rest period, Larry Wheels got in position to squat 188.3 kilograms (415 pounds) for a single rep.

“I’ll put the wraps on at 5 [500 pounds]. [My] top set likely will be 5 and a quarter maybe 6 [600 pounds]. I haven’t had more than five plates on my back in four or five months,” says Larry. “I had a back injury. Before that, I was doing strongman training so there was zero squats, just leg presses and extensions.”

“This is my third week back squatting. During the prep for the big deadlift I did, there was no squats. After that, that got cut short after the back injury — no squats. So today is not the best representation of where my squat could be on TRT. I’m sure maybe it’s 550 or 600 [pounds] for three to five reps.”

“Six plates… that’d be very reasonable for today. I’ll hit that for 5 [reps] if I can,” Larry shared.

Wheels proceeded with a 269.9-kilogram (595.1-pound) squat for five reps while continuing to test the limits of his strength without a cycle.

“Besides sliding, it [felt] good actually, Larry said. “The plan was to leave two reps in the tank. Just for John to write a training max for me to base my potential moving forward. And of course, to keep injuries low. I haven’t squatted this heavy and probably six months. I’ve squatted, but nowhere near this amount.”

“The lifts moving forward will all be in competition standards,” says Wheels. “With that said though, I’m still going to be using the elbow wrap all throughout.”

Wasting no time, Wheels fired off another single rep, where he hoisted up 483.3 kilograms (404.1 pounds). Building upon his previous lift, Larry bench pressed another 206 kilograms (454.1 pounds) for a brutal five reps.

“[Today’s training] far exceeded my expectations going into this workout. Still, for confirmation, in a couple weeks’ time,” Larry told John. “I don’t want to be on a mini cycle, I really do want to be on TRT. But look: if I can start from here and maintain this throughout prep and then hit even bigger numbers on 175 [migs of TRT] a week, I’ll be super happy with that.”

Larry Wheels finished the training session having registered a squat of 269.9 kilograms (595.1 pounds) for five reps and a 224.1-kilogram (494.1-pound) bench press for five reps. Given his latest test, it appears Larry is retaining most of his strength while using 175 milligrams of TRT weekly.