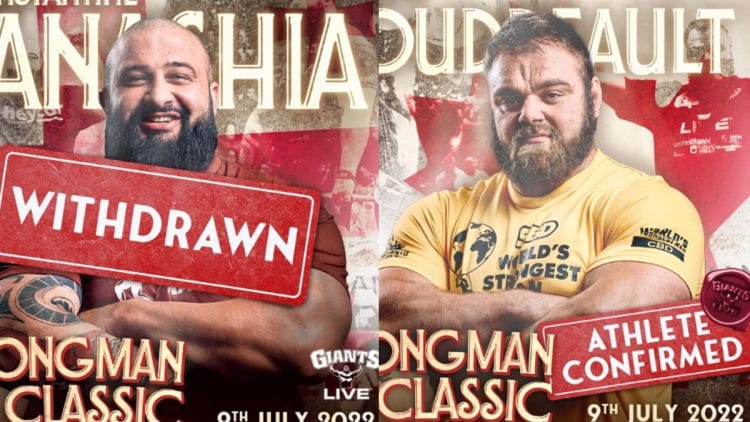 The 2022 Giants Live Strongman Classic is set to take place on July 9, 2022, at the Royal Albert Hall in London, England. The roster features only the best Strongmen in the world, so it seemed like a fantastic competition. Unfortunately, one of the competitors was forced to withdraw, and it was the representative of Georgia, Konstantine Janashia.

It was announced on the official Instagram page of Giants Live that Konstantine Janashia has withdrawn from the 2022 Strongman Classic. The reason for his withdrawal was not revealed, and Konstantine himself has not shared anything on his social media yet.

The 12 men’s lineup for the 2022 Giants Live Strongman Classic looked absolutely mind-blowing while Konstantine was featured. However, while it is unfortunate that ‘The Georgian Bull’ is missing out, the organizers have found the perfect replacement for him. The athlete who is added to the roster is the 2021 World’s Strongest Man third-place finisher, Maxime Boudreault.

This lineup exhibits the best of Strongman. We will get the chance to see the 2021 & 2022 World’s Strongest Man, Tom Stoltman, compete against a plethora of athletes able to rival him, with the likes of Oleksii Novikov, Rob Kearney, and Adam Bishop taking part. The newest sensation from the 2022 World’s Strongest Man contest, Mitchell Hooper, will also get the chance to further impress everyone.

It is obvious that the 2022 Giants Live Strongman Classic will be one of the greatest shows this year.

At 31 years old, Maxime Boudreault is one of Canada’s greatest Strongman representatives. He has been doing the sport professionally since 2013, so he has accumulated almost a decade of valuable experience. Maxime has also constantly been getting better throughout his career, which resulted in some historic performances in the last few years. Overall, Maxime has taken part in 24 major competitions, of which he has won one. His only victory came in the 2021 Magnús Ver Magnússon Strongman Classic.

Maxime Boudreault’s greatest events are the atlas stones, log lift events, and power stairs. However, he is much lighter compared to the majority of Strongman athletes, so events like bus pull and anything requiring a heavier bodyweight might limit him. The 2022 Giant Live Strongman Classic will consist of five events: Dumbbell Medley, The Pillars of Hercules, Farmer’s Carry for Distance, Axle Deadlift, and Castle Stones. These events look quite balanced for him, so anything could happen.

Withdrawal of Konstantine Janashia is definitely a massive loss for the 2022 Giants Live Strongman Classic. However, if anyone is suitable to replace him, it is Maxime Boudreault. We hope that nothing serious happened to Konstantine, but we will update the story if more information is revealed.