The roster for the 2022 Giants Live Strongman Classic looks very competitive, and the events will make it even more interesting. 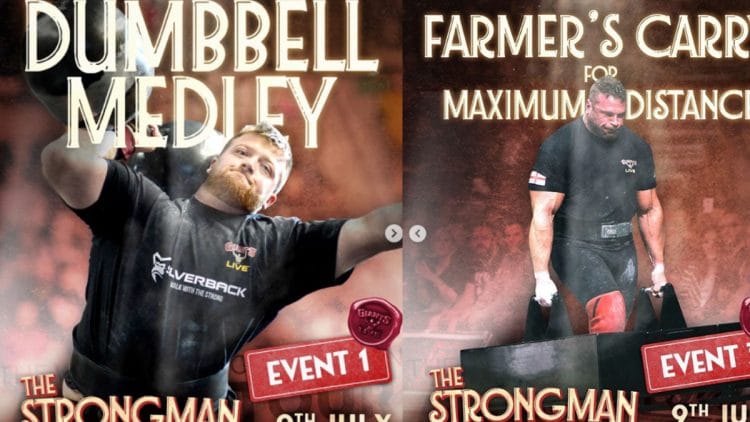 One of the greatest Giants Live contests, The 2022 Strongman Classic, will take place on July 9th, 2022, at the Royal Albert Hall in London, England. The competition will feature 12 World-Class athletes, of which 11 have already been announced. Looking at the stacked lineup, it was already hard to predict the winner. Giants Live just announced the events for the 2022 Strongman Classic, and it seems like we will get to see a very tight race. The competition will last for only one day and consist of 5 events.

Oleksii Novikov is the current reigning champion, and he will try to defend his title this year. He is coming off amazing performances at the 2022 Arnold Strongman Classic and a win in the 2022 Europe’s Strongest Man.

The 2022 Strongman Classic will start with the Dumbbell Medley. Two of the competitors will definitely stand out in this event. Oleksii Novikov seems like an obvious favorite, having proved his dumbbell clean & press prowess at the 2022 Arnold Strongman Classic. However, a lot is expected from Iron Biby as well. Iron Biby is the current log press world record holder, and his shoulder strength is absolutely unfathomable. It is currently not known how many dumbbell implements there will be, or how much they will weigh.

The Pillars of Hercules

The Pillars of Hercules are basically just a different name for the famous Hercules Hold event. It focuses mostly on the grip strength of athletes, and a lot of the competitors have already encountered this event in past competitions. Athletes with larger hands will naturally have an advantage, as it will be less taxing for them. In addition, the current Hercules Hold World Record holder, Mark Felix, will also be taking part in the competition.

The third event of the 2022 Strongman Classic will be the Farmer’s Carry for max distance. The competitors will have to carry “farmer’s” implements in each hand and find the perfect balance to cover as much ground as possible. Usually it would be important to go at a fast pace in this event. However, following the Pillars of Hercules event, all the competitors will have exhausted grips. Any instability caused by the speed could force the competitors to end their performance. Following the Pillars of Hercules, the grip will be the biggest limiting factor for the majority of competitors, so Mark Felix could excel in this event as well. It would also not be surprising to see Oleksii Novikov or Evan Singleton winning the Farmer’s Carry.

Considering that the Axle Deadlift will be the fourth and penultimate event of the 2022 Strongman Classic, the competitors could be tired by this point. The deadlift will weigh a massive 360 kg (794 lbs), which will feel even heavier on the axle bar. Adam Bishop will be the man to beat, as he has previously deadlifted over 950 lbs (430 kg). Konstantine Janashia will not surrender without a fight, while Evan Singleton could also come in and grab the max points in this event.

The Castle Stones, otherwise known as Atlas Stones, have to be the final event of the 2022 Strongman Classic, as they are featured as a finisher in most competitions. It is still unclear what weight the implements will be, but the win in this event could be claimed by anyone. It is also very likely that this event will be the deciding moment for multiple athletes’ placings.

As of this writing, the 12th athlete of the 2022 Strongman Classic has not been announced, and the space is left for a wildcard invite. So these are the 11 athletes that have been revealed.

All the events have now been announced, but the exact weight which will be used in each is not yet known. Once the information is made public, we will update the article. However, just judging by the events, it is already evident that it will be very taxing for athletes. As such it will also be a pleasure to watch for all Strongman fans.