Rauno Heinla is making significant improvements in his chase for the 505-kilogram (1,113.3-pound) deadlift. 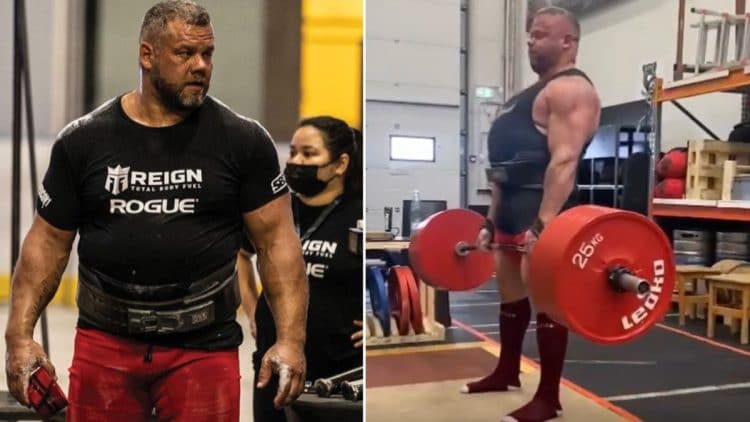 Rauno Heinla is quickly emerging as one of the biggest favorites to become the third person to deadlift 500 kilograms and possibly break the World Record. Coming from Estonia, Rauno is one of the lighter Strongman athletes. However, his strength does not lack at all compared to the heavier guys. He proved that once again on June 16, 2022, when he deadlifted 420 kilograms (925.9 pounds) for absurd four repetitions in training.

Rauno Heinla completed the colossal feat of strength while training with fellow Strongman legends, Laurence “Big Loz” Shahlaei and Aivars Smaukstelis. He absolutely played around with 420 kilograms (925.9 pounds) and had a few more reps left in the tank.

Rauno Heinla is obviously one of the greatest deadlifters currently, but there is no way to estimate what his max could be. However, Rauno will compete in the 2022 Giants Live World Open & World Deadlift Championships, scheduled for Aug. 6 at the Motorpoint Arena in Cardiff, Wales. He will be accompanied by other strong deadlifters and they will attempt to break Hafthor Björnsson’s World Record by locking out 505 kilograms (1,113.3 pounds). If Rauno is successful in doing so, he will get rewarded with $55,000.

Rauno Heinla had a rough start to this year, as he had to withdraw from the 2022 World’s Strongest Man because of stomach problems. He somehow managed to rebound successfully from that, having broken the Silver Dollar Deadlift World Record recently. The record now stands at 580 kilograms (1,278.7 pounds), which Rauno set at the 2022 Silver Dollar Deadlift Estonian Championship.

At 40 years old, Rauno Heinla has accumulated 45 professional Strongman appearances in his 13-year-long career. His deadlifting skills are definitely his greatest prowess. He held World Records in multiple variations and is now chasing one of the greatest records in the sport. Rauno Heinla has also deadlifted over 1,000 pounds (453.6 kilograms) in competition, and 470 kilograms (1,036 pounds) in training.

The Strongman scene is currently focusing on Rauno Heinla as he is regularly contesting or breaking World Records. He can now concentrate more on the event he does best, the deadlift. The 2022 World Deadlift Championships are almost two months away, which means Rauno has a realistic shot at lifting 505 kilograms (1,113.3 pounds).