Bodybuilding veteran Lee Priest gave his thoughts on the alarming number of professional athletes dying in the last two years. 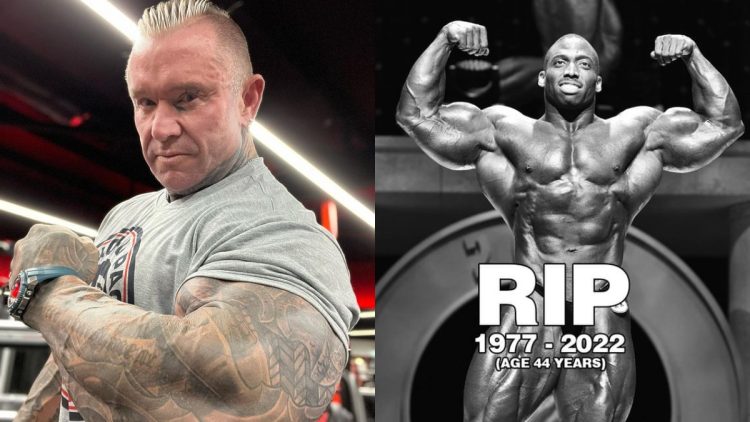 Decorated IFBB Pro League bodybuilder Lee Priest is one of the more vocal athletes in the sport with a well-respected voice in the community. In a recent video, Priest reacts to the late passing of Cedric McMillan while addressing the dramatic rise in deaths among professional athletes over the past two years.

Lee Priest made a name for himself throughout the 1980s-2000s in bodybuilding. An active competitor, Priest competed at several events and found his way to the prestigious Mr. Olympia stage a number of times. Despite his competitive nature and huge arms, he was unable to capture a Sandow trophy during his respective tenure. Nevertheless, he did what few athletes in bodybuilding have had the luxury of doing, which is leaving the sport on top.

After winning the 2006 Iron Man Pro and the NOC New York that same year, Priest would compete at his last bodybuilding event, earning yet another first place trophy at the 2013 NABBA Mr. Universe contest. Despite hanging up his posing trunks, Priest is an active member of the bodybuilding community. He announced that he would be transforming his physique in retirement, a process he has already begun. The credentialed Pro recently showed his progress, and Priest’s arms look nearly as big as they were during his prime years of competing.

Last year, the community was taken aback after the sudden passing of several bodybuilders. This concerning trend saw former Mr. Olympia Shawn Rhoden die at 46. Before 2021 Mr. Olympia could kick off, fan-favorite George Peterson also met his fate inside of the hotel room because of suspected heart complications. Thus far, 2022 has been no different as the beloved Cedric McMillan died due to reasons unknown. Priest did not speculate why bodybuilders are dying so often but offered some insight as to why he believes the problem has become so pervasive.

Lee Priest: ‘It Seems a Lot of People Have Died Over the Last Two Years in Any Sport’

During a recent YouTube video, the Australian native discussed the trend of professional athletes dying over the past two years. In addition, Priest discussed his experience dealing with a COVID-19 diagnosis, a disease that found its way into the United States in 2019.

“It is sad because like I said, Cedric, he was loved by a lot of people. A really good personality in the sport. He was one of those guys that you never heard people say a bad word about him. Plus, he was a father, and had family. It’s sad.

Causes, we don’t know. So, people can speculate and say what they want, and say this and say that but we don’t really know what the cause was. It’s just sad that this happened.” Priest continued.

“It just seems a lot of people have died over the last two years in any sport. Soccer players on one team, dropping dead. Certain athletes in other sports have dropped dead. Whether it’s from a certain reason or not, it seems a lot of things are happening in the last year or two when it comes to sports people in all sports. It’s just weird that the numbers have increased.”

“I had it. I caught it. I didn’t even know I had it. I thought, ‘oh, I’ll just do a test’ the one you can do at home. Rachel was really sick but me, I just had one side of my nose running for one day and I felt normal. I never really would have known I had it. But like you said, some people can get it and have nothing, then other people can be knocked down.”

Reflecting on the current state of bodybuilding, Priest admits the general lifestyle comes with risks. All in all, the bodybuilding legend believes athletes nowadays should focus on getting check-ups, including heart examinations.

“Bodybuilding, even just the food alone, eating a lot of food — proteins and stuff, then supplements on top of that. Sometimes, it’s good just for peace of mind.

But sometimes, you can have indigestion or anxiety and feel like you’re having a heart attack but at least if you had your heart checked, there’s no blockages, you know your cholesterol is fine, all of sudden you think you’re having a heart attack, and you say, ‘wait a minute, I’m sweet there.’ Sometimes I would go to the hospital thinking deep down I know I’m okay, but if I go to the hospital and they do the tests and say you’re okay. Hearing them say it, you just feel better.”

Priest recommends all athletes, especially bodybuilders, get health screenings done regularly. Life is fickle, and sometimes the seemingly unhealthiest people live longer than athletes who are perceived as ‘the picture of health.’

“People like to be like, ‘well, what I don’t know, can’t hurt me.’ But pretty much what you don’t know can hurt you. That’s the thing too. A lot of people that do drop dead, just drop dead like boom. Out of the blue. Some of them don’t get, you know how people say if you’re having a heart attack you might get pains in the arm, feel weak or numb, feel weird, that sort of thing. But sometimes people don’t, and they just go boom.”

“Like I say whether it be Cedric in bodybuilding or other people in sports. When you look at them, you look at them like they’re a picture of health. You think they go to the gym every day; they eat good. Priest added. “It’s funny.

So many healthy people drop dead, and the ones that drink and smoke… sure lifestyle is a contributor and I think genetics too. Sometimes, no matter what you do, your genetics are going to determine what affects you.”

In light of so many deaths in bodybuilding, notable athletes like Seth Feroce and Kali Muscle continue to forewarn athletes about the lethality of steroids. Feroce has been blunt in his approach, voicing that ‘steroids will kill you’ and that bodybuilders are ‘playing with fire’.

Given the community’s concern for deaths in the sport, Priest believes adequate health screenings are one of the best methods to combat the issue. The topic is undoubtedly sensitive, but given his experience, Priest’s insight is a valuable asset to the sport.