It appears as though Kristy Hawkins is outsmarting herself once again, pushing the boundaries of her own self-limiting beliefs. 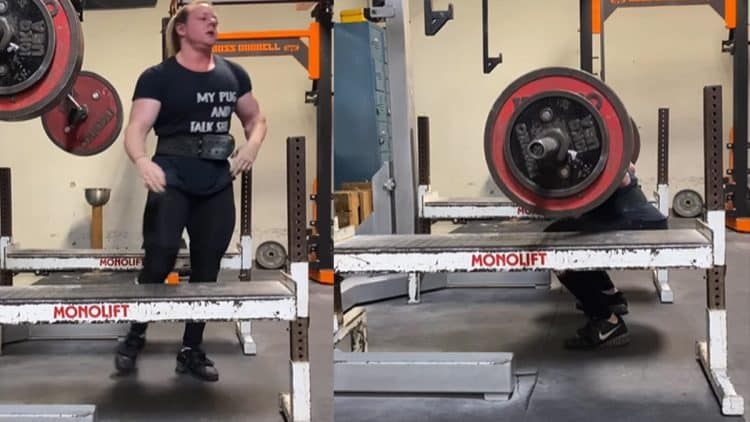 Despite her 42-year-old age, Kristy Hawkins is regularly setting personal records in her pursuit to better her existing World Records. One of them is her 262.5-kilogram (578.7-pound) squat record, which she set at the 2021 WRPF The Bucked Up Showdown. This is easily one of the greatest lifts in the history of powerlifting, but Kristy is now inching closer to adding a few more pounds to it. This is currently relevant because Kristy Hawkins just scored a brand new 250-kilogram (551-pound) squat three-rep PR.

It can be seen on her Instagram profile that Kristy Hawkins has progressively been upping the weight and lowering the rep range consistently for the past few weeks, with the most recent one being the new three-rep PR. Kristy’s first two reps of the 250-kilogram (551-pound) set looked quite comfortable, but she had to grind out the final rep. She also acknowledged her slight struggle in the caption of her post. In addition, Kristy’s new three-rep PR was raw, as she only used a lifting belt and knee sleeves to aid her in the lift.

It is not clear what Kristy Hawkins’ bodyweight at the time of her new three-rep squat PR was, but she usually competes at around 74 kilograms (163.1 pounds). Kristy has not indicated if she will compete anytime soon, so her bodyweight might not be in this range.

Kristy Hawkins is a woman of many talents, as she is one of the greatest powerlifters ever, a successful bodybuilder, and is a chemical engineer. Regarding her sports career only, Kristy competed in both powerlifting and bodybuilding at roughly the same time and somehow managed to balance it perfectly. The peak of Kristy’s bodybuilding career was at the 2007 NPC Nationals when she got her IFBB Pro Card. She then took part in four Pro Bodybuilding Shows before retiring in 2011.

Despite building a name for herself in bodybuilding, Kristy Hawkins really found the most success in powerlifting. She holds Squat, Deadlift, and Total World Records in the 75-kilogram weight class, which makes her one of the greatest pound-for-pound athletes in the sport. Kristy competed in a total of 20 sanctioned powerlifting competitions and won 16 of them.

Despite her dissatisfaction with how she felt, Kristy Hawkins managed to set an exceptional PR. However, there is still room for improvement when it comes time to compete. This makes Kristy Hawkins an athlete to keep an eye on in the upcoming few months, as something historical could take place.