The eight-time Mr. Olympia discussed competing against Dorian Yates and took aim at overtraining: 'look at the legends of old, they are still walking straight up.' 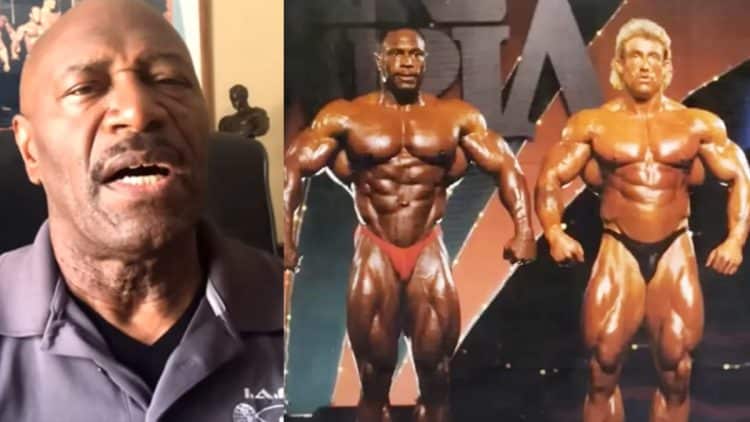 Lee Haney is responsible for leading one of the most successful IFBB Pro careers in the history of the sport. In a recent video, he discussed his rivalry with Dorian Yates before sharing how legends like Frank Zane were able to achieve success and longevity.

During his tenure, which took place throughout the 1970s-1990s, Haney was a force to be reckoned with any time he took his talents to a contest. He is tied with Ronnie Coleman for acquiring the most Mr. Olympia titles at eight.

In the process of establishing himself as an all-time great, he competed against a number of bodybuilding legends, like three-time Mr. Olympia Frank Zane, his successor, six-time Olympia champ Dorian Yates, and Lee Labrada.

Haney believes the sport has changed drastically since his time in the spotlight. Not only have Pro cards become easier to get in his opinion, but bodybuilders lack the quality they once had on the sport’s most prominent stages. Overall, he maintains that modern bodybuilders have gained more size but sacrificed muscle separation.

In his latest interview, Haney discussed his professional rivalry with Yates. In addition, he gave his thoughts on why bodybuilders like Frank Zane and Robby Robinson have found longevity, even though some bodybuilders who competed after them have not.

Lee Haney on Competing vs. Dorian Yates During Reign: ‘I Don’t Think He Was Pushing Me’

During the recent video, Haney said there was ‘no doubt’ that he would have defeated Yates in 1992 had he come out of retirement.

“Oh yeah, no doubt about it [I would have beat Dorian Yates in 1992 if I competed one more time]. And see, it all depends on what the judges wanted to see. Well, I think he was trying to get there [push me]. I don’t think he was pushing me because I mean — the photo you just put up, that says it all.”

When you’re talking waist-to-shoulder ratio, you’re talking maturity level of his physique, you know the way we remember bodybuilding. You know, you have to have those fine lines and that’s something that’s created over a period of time. Listen, I was gunning for the Olympia eight years in a row, nine years — I placed third at my first Mr. Olympia. It takes time to get there,” says Lee Haney.

“As you see, even in this picture Dorain’s physique hadn’t fully matured. Of course, he came back bigger the following year but still the maturity level had to reach where I was when I left, and I still had the upper hand on that plus the overall symmetry.”

According to Haney, his era ‘was saying’ he needed to have a physique comparable to Arnold Schwarzenegger, Robby Robinson, or Frank Zane.

“Well, you know what made me better Dave, it wasn’t that I was in fear of Dorian because I always knew if I could look like Arnold [Schwarzenegger], Robby Robinson, Frank Zane… and that’s what bodybuilding was saying — that era was saying that’s what you need to look like.”

Haney Talks Longevity at 62-yo, ‘Heavier Weight Wouldn’t Have made Frank Zane Better’

Haney feels great in retirement and praised the longevity of bodybuilders like Zane and Robinson. Ronnie Coleman, who competed decades after these bodybuilders, has been hampered by surgeries since stepping away from the sport.

“I’m 62, I’ll be 63 in November. I have no knee, no hip, no back, no joint problems whatsoever. I feel great. That’s because of living by that phrase [don’t overtrain].

You look at guys like Frank Zane, you look at Robby Robinson, you look at the legends of old — these guys are still walking straight up and haven’t had a bunch of surgeries because the mind and the muscle linked as I’ve heard them talk about that so much,” Lee Haney shared.

Haney advises athletes to practice bodybuilding while taking their genetic ‘blueprint’ into consideration.

“I always heard that, they never talked about using lots of heavy weight. After all of that, that muscle maturity happened. As it happened, the body became a work of art. Look at Frank, then another thing I look at too — you’re genetic blueprint.”

“I don’t care if Frank used eight million pounds, he still was in a class of his own with his body type and that type of physique. No heavier weight would have made Frank Zane a bigger guy. You have to stay in line with who you are genetically. Work with what you have to try to make it better.”

When Haney isn’t looking back on his illustrious career, he’s examining the Men’s Open lineup expected to compete at the 2022 Mr. Olympia contest. While size wasn’t favored in his era as it is today, he respects the muscularity of two-time Mr. Olympia Mamdouh ‘Big Ramy’ Elssbiay. He urged contenders like Brandon Curry not to play the size game and argued that Curry’s path to victory is contingent on more muscle separation.

Despite sharing the stage with Yates, Haney always felt like he had the upper hand. Haney believes athletes can benefit from understanding their genetic strengths, which bodybuilding legend Frank Zane was quite familiar with during his time in the sport.