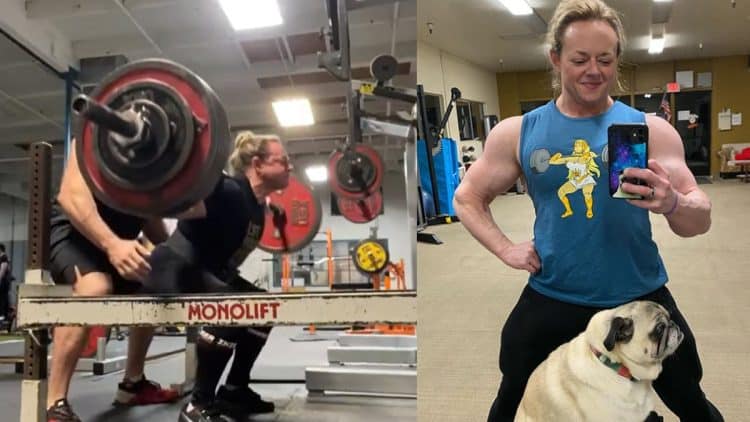 Usually making progress in powerlifting is a slow and inconsistent process, but occasionally an athlete can break through their sticking point and keep riding the momentum. This is particularly evident in the recent case of Kristy Hawkins, who claimed a new squat three-rep PR just ten days ago, but has now improved her performance by a significant margin. Kristy just posted a massive three-rep PR by crushing 255 kilograms (562.2 pounds) raw squat, the heaviest she’s ever done.

At 42 years old, many would think that Kristy Hawkins has already passed her prime years for powerlifting, but she continues to prove them wrong. Her new 255-kilogram (562.2-pound) three-rep PR is the best proof of that, since she also performed it raw. Kristy utilized a lifting belt and knee sleeves, while her technique and depth were as close to perfect as possible.

Kristy Hawkins’ new PR is impressive for many reasons, one of them being that she managed to add 5 kilograms (11 pounds) to her previous best in just ten days. In addition, this three-rep set is just 7.5 kilograms (16.5 pounds) shy of the All-Time World Record in the 75-kilogram weight class, in which Kristy usually competes in. Kristy also holds that record, having squatted 162.5 kilograms (358.3 pounds) at the 2021 WRPF Bucked Up Showdown.

Judging by her recent progress, it is reasonable to assume that Kristy Hawkins is actively preparing for a competition. However, she has not revealed any information in recent times as to when and where she intends to compete.

Kristy Hawkins’ At A Glance

Kristy Hawkins’ first love was bodybuilding, as she also amassed a lot of success and got an IFBB Pro Card. However, having set new goals, Kristy decided to switch sports and begin powerlifting professionally in 2014. Immediately, it became apparent that she had the potential to become one of the greatest powerlifters in history. So, ever since then, Kristy predominantly focused on powerlifting and it definitely worked in her favor.

Kristy Hawkins competed in a total of 20 sanctioned powerlifting competitions and won 16 of them. In the process of doing so, Kristy claimed multiple All-Time World Records, some of which still stand.

Seeing that she is not far off from further improving her own world record, Kristy Hawkins could be aiming exactly for that. In addition, this goal could explain why Kristy is focusing so much on the squats lately. Regardless, it’s awesome to see Kristy improving, since it will go towards further cementing her legacy in powerlifting.