"The Mutant" moved some heavy weight during a recent chest and biceps training session with only six weeks until 2022 Olympia. 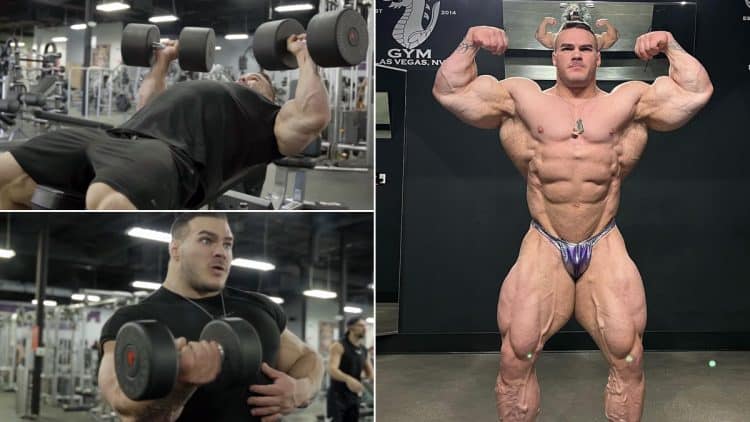 Bodybuilder Nick Walker isn’t slowing down en route to his second Mr. Olympia appearance later this year. In a recent video, Walker showcased his strength during a brutal chest and biceps training session.

Walker is currently amid preparations for 2022 Olympia. This comes after a very successful 2021 season, which started with Walker claiming victory at the New York Pro and the Arnold Classic consecutively. At his first-ever Olympia contest, Walker finished fifth.

Ahead of Walker was fourth-place finisher Hunter Labrada. Labrada, who is guided by his father, IFBB Hall of Famer, Lee Labrada, made considerable improvements to his physique since last year. During the off-season, Labrada and Walker connected for a brief training session. After sizing each other up, they both agreed to face each other at ‘100 percent’ this winter.

All season long, Labrada and Walker have gone back and forth with physique updates. While their rivalry is strictly professional, they both appear to be pushing each other inside and outside of competition.

When discussing the potential showdown, Walker boldly stated that he will win the battle against Hunter. Moreover, he said he’ll accomplish that feat with conditioning. To make that goal a reality, Walker is sharing his latest chest and arms training session.

Nick Walker revealed he’s weighing 279 ‘on the dot.’ During his latest Olympia Prep series episode, he went through a taxing chest and arms workout, which you can find below:

After the grueling workout, Walker shared his post-training thoughts and discussed his next plan of action.

“That was a really good workout for today. I think I did enough there. Good pump. Great pump actually in the biceps and the chest, which means you know… I’m still — the food isn’t really that high to be honest. But you know, it’s doing its job. I’m dropping weight now.”

Walker added that his ‘mental state’ is on point as his prep intensifies. While he admits he was struggling with confidence earlier in the season, he says it’s now coming back.

“Definitely can tell the body is starting to change really good now, so I’m happy about that. The stress levels are pretty much going away at this point. Mental state is where it needs to be at this point. I’m definitely feeling confident going into this Olympia now.”

I think good things are to come in the next seven weeks. Still plenty of time but I’m really starting to push down a little bit as far as intensity goes, the cardio, the training. Not that I don’t anyway, but the closer I get to the show, the more intense I seem to get. That’s when my body really changes. Like I said, when I get my confidence back, it’s dangerous for everyone. It’s game time,” Nick Walker said.

In addition to training with Open class competitors, Walker has been utilizing deadlifts more during his latest prep. He hopes with the added training this year, he can improve upon his fifth-place finish from 2021 Olympia. Before all is said and done, the 28-year-old plans on winning as many Arnolds and Olympias as he can before calling it a career.

Given the consistency of Nick’s recent physique updates, many in the sport believe he could disrupt the Open lineup at Olympia. While eight-time champion Ronnie Coleman is picking Ramy to defend his title, “The King” noted that Walker and reigning 212 Olympia winner Derek Lunsford are wild cards.

Determined to bring his best, the New Jersey native hopes to defeat rival Labrada and assert himself as a title contender. Walker’s recent 10-exercise chest and biceps training session pushed his limits but he’s confident these measures will help him reach the first call-out at 2022 Olympia.

You can watch Walker’s full workout video below: