In the prep for his return to the world of competitive powerlifting, Larry Wheels scored a massive squat in knee wraps 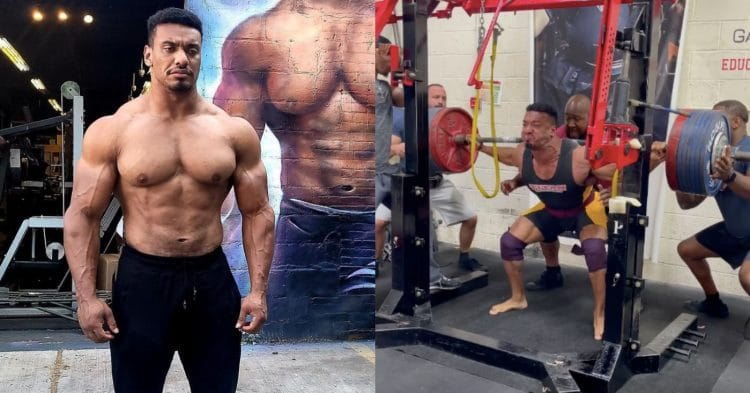 The personal record wrecking machine himself, Larry Wheels is set to make his long awaited return to powerlifting competition. About two months away from this, he managed to score a massive squat PR in the training room.

The last time Wheels competed in a powerlifting event was at the 2020 Arnold, where he came first in the 140kg division, just before things went south with the pandemic. Since then, he has been putting a lot of focus into learning the ropes with arm wrestling, even having a high profile match with Schoolboy.

Now he is set to make his return to the powerlifting world with a meet scheduled for about 8 weeks away. As he shared with a post to his Instagram though, he has not missed a beat, as he was able to squat a whopping 835lb squat to score a new personal record, while wearing knee wraps.

This squat PR was the last stop in a video that Larry Wheels posted to his YouTube, where he continued prepping for his return to competition, training with Black Tom Cruise and others in New York.. In this same video, he also revealed the contest that he plans to compete in.

In the video he revealed that he looks to compete at the Revolution Powerlifting Sydnicate’s (RPS) Long Island Insurrextion meet. This contest is currently slated to take place on September 11th, 2021 in Farmingdale, New York.

“This is the beginning of a ten-week prep or so, for September 11th, RPS meet. This is one of the best entries into contest prep I’ve had in a long time, so I’m really excited about it. After a long hiatus from powerlifting, my spine, my joints, everything feels good, so we’re expecting big things,” Wheels said.

Larry explained that this was a PR for him with wraps, as this type of lifting is not something that he does very often. However, with the help of his coach, he is getting used to the differences in techniques when it comes to wearing knee wraps, and he is feeling good about the process.

With about two months to go until he steps on the platform for the first time in more than a year, Larry Wheels is looking to already be in great shape. As much as it was entertaining to see him dabble into arm wrestling, it is hard to argue with the idea that powerlifting is where Larry does his best work.