Life and Accomplishments of Derek Lunsford 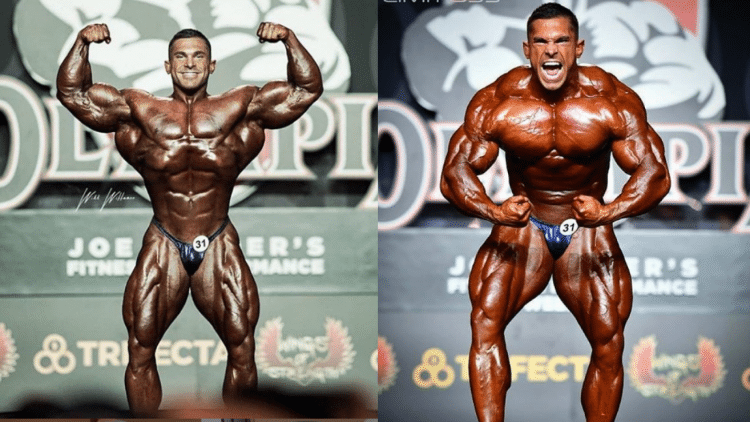 Derek Lunsford is a bodybuilding competitor who is one of the best in the world in his weight division. This is his life story, diet, training regimen, and more. At the 2022 Mr. Olympia competition, Lunsford made his debut in the Men’s open division and earned a second-place finish.

Derek Lunsford was a very active child, from the moment he was born in Petersburg, Indiana. At an early age, he developed a love for exercise, taking part in sports. Notably, he chose to play soccer, as well as having a fairly successful high school wrestling run.

However, all of that was forced to change when Lunsford went to college. Unfortunately, the school that he attended did not have a wrestling program. Nonetheless, he did not want to stop athletic endeavors, so he was forced to look into other sports. Instead, he began to take an interest in lifting weights, opening the door to a career in bodybuilding.

Initially, Derek Lunsford had a hard time getting the results he was looking for. Therefore, he found a personal trainer, in the form of James Brown. Once these two were paired up, Derek was able to get the guidance needed to begin seeing some serious gains.

Lunsford began working extremely hard and developing an unbelievable physique. It was at this point, that he watched a documentary on bodybuilding. Inspired by the likes of Jay Cutler and Phil Heath, he began to really enjoy the sport. Therefore, he began to take a chance at making a career in the sport.

At the age of 22, Derek Lunsford would make his amateur bodybuilding debut. He would take the stage at the 2015 NPC Indianapolis Championships, in the Men’s Open Welterweight division. Furthermore, he was able to win this competition, starting his bodybuilding endeavors off with a bang.

Lunsford would take about 12 months off from competing, before competing for the last time as an amateur. He would take the stage at the 2017 NPC USA Championships, again earning second place. However, despite the fact he did not win, he was able to earn his Pro Card and begin his run as a professional.

Derek Lunsford wasted no time making his professional bodybuilding debut. Just a month after earning his Pro Card, he competed at the 2017 IFBB Tampa Pro. He managed to completely demolish the competition, winning in the 212 division.

As a result of his win at the Tampa Pro, Lunsford was granted an invitation to the 2017 Mr. Olympia. Subsequently, just one month after his pro debut, he made his debut on the big stage. Furthermore, he managed to capture the 5th place position. Therefore, he had established himself as a massive prospect in the division.

One of the few criticisms that could be made about the career of Lunsford thus far, is his lack of regular competition. In fact, he would only compete at Mr. Olympia in 2018. Although this time, he would see improved results, instead earning second place. On top of that, 2019 would be the same result, again only competing at Mr. Olympia, earning second. In 2020, he scored fourth place in 212 Olympia and won the title in 2021. Lunsford received a special invitation to compete at the 2022 Olympia in the open division, and he did not disappoint and took second place.

Derek Lunsford keeps a regular training schedule, working six days a week. More specifically, he puts a focus on his abs and legs, in particular, working them twice weekly. Additionally, he does cardio at least once, sometimes twice per day. This keeps his weight low, and his conditioning up for competition.

This is Lunsford’s weekly training split:

When it comes time to do his workouts, Lunsford makes sure to warm up. He regularly does high reps of light weights, to help prevent injury. Furthermore, he utilizes drop sets to ensure total muscular fatigue during a workout.

This is the shoulder workout Lunsford uses:

It took a while for Derek Lunsford to find a diet plan that worked best for him. However he eventually settled on eating every 2-3 hours. Moreover, he does his best to include 50-60g of protein in each meal. Additionally, he pays close attention to his macronutrients, in order to ensure quick recovery from training. This also aides in muscle growth, helping achieve better gains.

Some of Lunsford’s favorite foods include:

When it comes to supplements, Lunsford is a big believer in getting your money’s worth. He has been known to make videos for people, explaining how they can get all the supplements needed at a reasonable price. Specifically, he puts an emphasis on multi-vitamins, and amino acids, as well as whey protein.

After his performance in 2022 Mr. Olympia Derek Lunsford is a now highly touted prospect to win the Mr. Olympia title. He was able to make a name for himself from the very start of his career. Subsequently, he has only grown in popularity from there.

Following a second-place finish at the 2022 Olympia, Lunsford is likely driven to achieve the highest possible result in future competitions. As a result, his next objective is to win the Olympia gold, which is considered the pinnacle of success on the Olympia stage.

Lunsford has already proven his capabilities as a top athlete by winning the 212 Olympia championship in the past. This victory demonstrates that he has the skill and determination needed to succeed in high-level competitions. Additionally, by competing in the men’s open weight class, Lunsford has shown that he can hold his own against some of the largest and most physically imposing athletes in the sport.

Overall, Lunsford’s second-place finish at the 2022 Olympia and past victories serve as evidence of his abilities and make him a strong contender for the gold medal in future competitions.