Larry and Brandon arm wrestled in the King of the Table 2.0 event 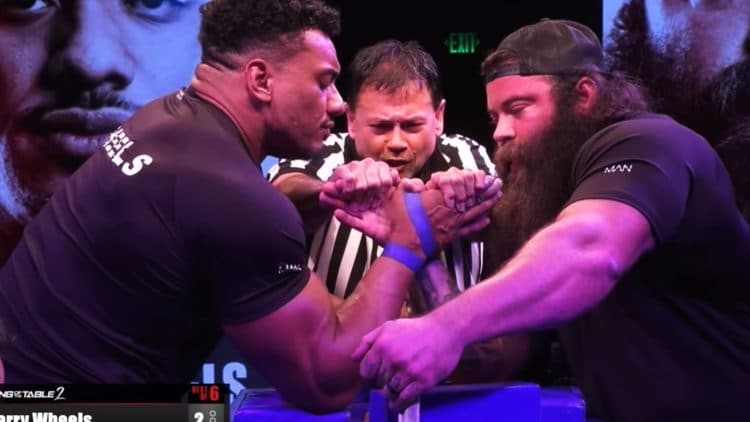 Larry Wheels is known for powerlifting, but he has been getting some valuable experience in his arm wrestling career. After Larry’s two defeats against Aleksandr “Schoolboy” Toproll, in which he was dominated, Larry managed to put up a good fight against a powerlifter Brandon Allen. To win the match, they had to do a best of 6. To further explain, one of them had to win 4 rounds, to win the match.

In the first round of the match, Larry’s and Brandon’s hands separated, so the referee decided to use the straps to prevent that. They proceeded to strap up each round.

Larry won the first and the second round, and it looked like he might have the win. In the third round Larry seemed to be fatigued, Brandon noticed that and used it to his advantage, which got him a point in the match. Brandon very easily won the fourth round, where Larry didn’t even seem to give an effort. In the fifth round Larry left it all on the table, with a strong pull from the start, Brandon managed to hold his ground and counter Larry’s pull. At that moment we saw that Larry’s arm was fully exhausted, and Brandon managed to get a 3:2 lead. Brandon then dominated the sixth round and won the match.

You can watch the full match here:

Related: Brandon Allen Tears his Quad OF THE BONE Squatting

In the latest addition to the Larry Wheels YouTube channel, we could see some pre match banter and trash talk between Larry and Brandon. They started the conversation off with some comments about Larry’s coach, which Brandon used to tease Larry and imply that no coach could help him.

They then continued talking about their experiences in arm wrestling, until Brandon mentioned that he trained with Mike Ayello. Larry has also had some arm wrestling experience with Mike, and Brandon fired more shots towards Larry.

“From what he told me, there is no way you improved that much” said Brandon.

Larry responded and said that Mike Ayello will probably be his opponent at his next arm wrestling show.

“I would shock him the next time. Matter a fact, he might be my next opponent.” said Wheels.

Brandon had some jokes for himself too.

“You’re gonna disappoint your fans. My fans will be f*****g stoked, all six of them” said Brandon.

You can watch the full interaction here:

At the end of the day, it was a great match between two very strong guys. Powerlifting, like everything else, takes time and experience. With Larry’s competitive nature, there is no doubt that he will come back stronger and better.