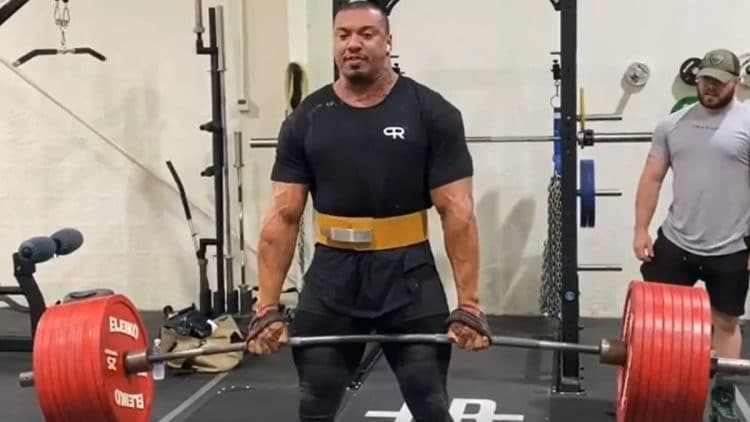 Larry “Wheels” Williams is known for his almost incomparable power and when he decides to fully isolate and focus on one exercise, we are bound to witness an incredible feat of strength. This is the main reason why Wheels is so well known in the strength sports community. On May 3, Larry scored a massive 425-kilogram (937-pound) deadlift during training and posted it on his Instagram. He also announced that he would attempt to set a deadlift personal record in August.

Larry Wheels has an extensive history in powerlifting, but he is now preparing for a Strongman competition. He intends to compete in the 2022 Middle East’s Strongest Man, which will take place on Aug. 27-28, in Dubai. One of the events at this contest will be the max deadlift, while the rest of the events are said to be a log lift, medley, truck pull, and atlas stones.

It is common for Strongman athletes to use a deadlift suit, as it is allowed in their sport, but Larry only used a lifting belt and lifting straps. So while his lift would not be raw in powerlifting, it is considered raw by Strongman standards. His style of lifting is with a conventional stance, which is a must in Strongman as well.

Larry stated in the caption of his post that he deadlifted 425 kilograms, which he seems to think correlates to 925 pounds. However, once we transfer 425 kilograms to pounds, it equates to 937. It is evident in the video that Larry used kilogram plates, so it was probably just a calculation mistake.

There is no doubt that Larry Wheels is ecstatic that the max deadlift is one of the events at the 2022 Middle East’s Strongest Man, as it is one of his greatest skills. He already took part in the 2019 Odd Haugen Strength Classic, which was his debut Strongman outing. Larry is now coming back for his second competition and is looking to possibly become the Strongest Man In the Middle East.

It is also worth noting that Larry Wheels was doing powerlifting professionally for over seven years. He took part in 16 sanctioned competitions, and won 11 of them. Larry claimed and still holds the U140KG All-Time Raw Bench Press & Total World Records.

Larry Wheels is currently living an extremely busy life, but is still able to crush massive lifts and aim toward new PRs. Apart from training for Strongman, Larry is very active in the sport of arm wrestling. He also moved on and found success in bodybuilding after dominating the powerlifting scene for multiple years. He has now set out to score a new deadlift PR, and it is just a matter of how heavy he will go. Wheels’ recent deadlift strength shows how far he’s come.