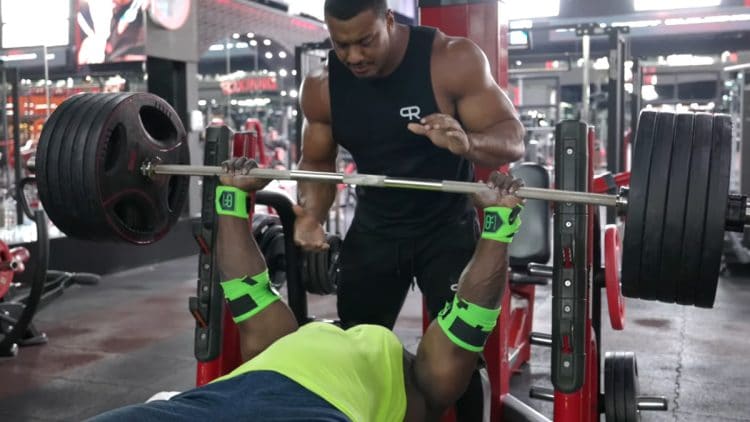 Bodybuilder and powerlifter Larry Wheels recently joined hands with Nigerian Strongman Jerome Pever for a bench press training session. Wheels is currently preparing for 2022 Middle-East’s Strongest Man in Dubai. The competition is scheduled to take place on August 27th and 28th. The 27-year-old is taking his competition prep seriously and has kept his 2.3 million YouTube subscribers updated with his progress over the last few weeks. Nigerian Strongman Jerome Pever will compete in a week’s time at the Emirates Strongest Man.

Larry Wheels is known for his record-wrecking lifts and he is no stranger to heavy bench presses. Jerome Pever also claims to have a 270kg (605lbs) bench press personal record. Larry Wheels took a back seat for this particular training session and allowed Jerome Pever to take the lead.

The duo started the training session with 100kg (220.5lbs) weight and performed six reps each. They performed the next set of 120kg (264.6lbs) bench presses for three reps each. The duo worked their way up to 200kg (441lbs) with a 20kg jump for each consecutive set.

Larry Wheels used to take 40kg (88lbs) jumps during his warm-up sets earlier. However, in order to make a slow and steady progression, he can be observed increasing the weight by 20kg (44lbs) in each one of his warm-up sets.

Off late, Larry Wheels is not indulging in heavy lifting sessions that we are accustomed to watching him perform. The 27-year-old stated that he has not trained specifically to improve his speed and explosiveness since he became a powerlifter. He admitted that getting stronger quickly was the sole focus of his training sessions in the past few years.

“(Explosivity) is something that I have not worked on since I’ve been a full-time powerlifter… It was all about getting from point A to B as quickly as possible. Nothing… I didn’t care about getting a pump or getting bigger. I just cared about getting stronger.”

However, his coach Mark Boyd wants Wheels to build explosive strength and increase the speed of his lifts. Lifting lighter weights is one method to do it and therefore, Wheels has stopped lifting heavy in this stage of his training camp.

After getting sufficiently warmed up, Larry Wheels performed the first working set of bench press with 220kg (485lbs) weight and cranked out eight reps. He did two more sets with same weight and performed five reps in each set to conclude the bench press work.

Jerome Pever also used 220kg (485lbs) weight for the working sets and managed to get in five reps in the first set with the suicide grip. When a person uses the suicide grip or the thumbless grip, the bar sits lower down on the palm. To generate the force on bench press, the forearms have to be perpendicular to the ground. Suicide grip enables this exact positioning. However, it also gets an insidious sounding name due to the risk associated with it.

Since the thumb does not wrap around the bar while using the suicide grip, there is a chance that the bar might slip and fall on the person’s chest causing severe or even fatal injuries. Pever finished the bench press session with two more sets with the same weight and cranked out four and three reps in each set, respectively. Both men used smelling salts or Ammonia inhalant to aid the lifts after the first working set.

After wrapping up the bench press session, Larry Wheels and Jerome Pever worked the upper chest. The duo started the workout with incline dumbbell press and performed their first sets with 50kg (lbs) dumbbells. However, the workout took a different turn as Wheels attempted to do the incline dumbbell press by stacking 22.5kg dumbbells on top of 50kg dumbbells. The weight started toppling during the first few reps and Wheels had to abandon the effort. On the other hand, Jerome Pever balanced the weights quite well and managed to get six reps in.

Larry Wheels and Jerome Pever next performed an incline machine press to work the upper chest. Each set started with full reps and ended with a few partial reps to failure. The duo performed four sets each of this movement and moved on to the next exercise. While explaining the reason for using this particular machine by Gym Sharp, Larry Wheels said:

“I find you’re really working your upper chest most effectively when your elbows are flared and you have a wide grip. The issue with many of (the other machines) is… For us bigger guys, broader guys… we end up pressing here (wrists are shoulder width apart). The tension on the elbow doesn’t feel good. I want to be outside my shoulder line… To be comfortable in my elbows and to get a really good contraction.”

Larry Wheels and Jerome Pever next took to cable chest flyes. This movement provides better shoulder blade stability and also limits the stress on joints. The muscles are under constant tension throughout the range of motion during cable chest flyes and it is a safer alternative to free weight movements – especially towards the end of the workout when the muscles and joints are exhausted with hard labor. Wheels and Pever performed two sets each of this exercise and wrapped up the training session.

Courtesy of Larry Wheels’ YouTube channel, you can watch the full video here: