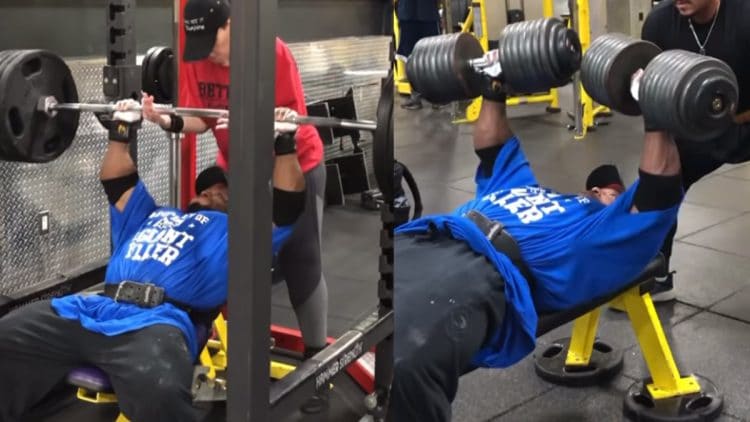 Bodybuilding standout Shaun Clarida has been known to push it during training and has shown an incredible level of consistency at shows. In a recent Instagram video, Shaun annihilates chest day with 160-lb dumbbell presses for 15 reps, 405-lb Incline bench presses for 7 reps and cable flyes for 15 reps.

After staking his claim in the 212 division by winning 2020 Olympia, Shaun Clarida has demonstrated that he has what it takes to compete with the world’s best. While Shaun contended as a 212 competitor for most of his career, he has refocused his efforts on the Men’s Open bodybuilding class. Before making the transition into a new division, he competed at 2021 Olympia in the 212 division and placed in second behind Derek Lunsford.

Shaun made his Men’s Open debut last October competing at the Legion Sports Fest Pro. He won first place and proved he could stand against top performers like runner-up Regan Grimes and Sergio Oliva Jr. who came in third, respectively. The victory also earned him the nickname “Giant Killer”. Clarida has a lifetime invitation to compete at Mr. Olympia in the 212 division. He’s also earned an invitation to compete at 2022 Mr. Olympia in the Men’s Open division. After speaking with Olympia President Jake Wood, he will need to choose between Men’s Open or 212 division at this year’s show.

Bodybuilder Shaun Clarida Shares ‘Hard and Heavy’ Workout: ‘It’s The Only Way I Know How to Train’

In a recent Instagram post, Shaun gave his fans a peek into his off-season prep and demonstrated a series of muscle building workouts.

“Hard & Heavy!…Only way I know how to train!

Shaun is lifting heavy and high volume. The IFBB Pro starts with 160-lb dumbbell presses for 15 reps and follows it with 405-lb incline bench presses for 7 reps. He finishes the routine with cable flyes for 15 reps.

After the biggest win of his career at 212 Olympia in 2020, he was being hailed as a ‘minnie Ronnie Coleman‘. Similar to “The King” Shaun enjoys pushing the pace and challenging himself in and outside of competition. While leading a career filled with diets and meticulous preps, Shaun hasn’t turned his back on his health either.

There have been a growing number of bodybuilders dying lately leaving the sporting community concerned. 2018 Mr. Olympia Shawn Rhoden passed away at 46 years old last year, and the recent passing of Cedric McMillan was another gut punch given his optimistic personality and impact on the sport. At the beginning of the year, Clarida had his heart checked with an EKG (Electrocardiogram) and Calcium Score and revealed that no plaque was found around the arteries of his heart.

The former 212 Olympia champion has managed to compete with an elite-level talent for quite some time, and if this workout is any indication, he’s here to stay. Clarida certainly knows how to prepare his physique for competition. 2022 Mr. Olympia is in his sights and Clarida is making sure he continues doing what he does best, training hard and heavy.

Clarida has not disclosed which division he will participate in at the 2022 Mr. Olympia, which will be held from December 15-18, 2022, in Las Vegas, NV. Regardless of whichever division he plans to compete in, Clarida certainly wouldn’t miss a muscle pump in the gym.