Larry Wheels also thinks that he is on track to deadlift 1000 pounds and becoming the lightest person to do so. 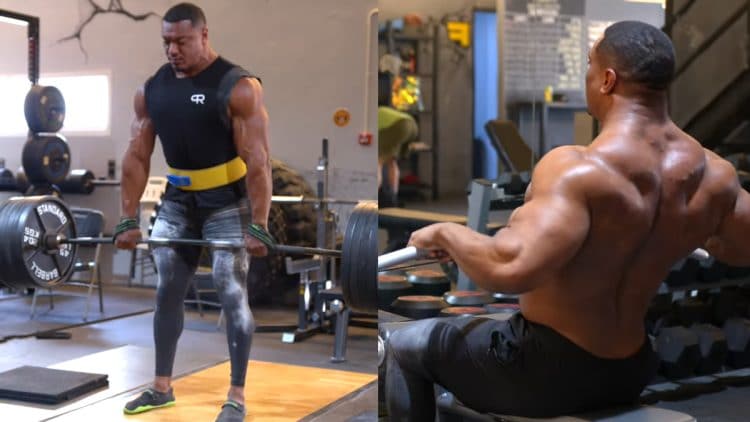 After Larry Wheels deadlifted 771 pounds (321.2 kilograms) for 27 repetitions in one training session, it was obvious that he was relying on volume to improve his numbers. Larry has now upped to a whole new level, as he pulled mind-blowing 72 repetitions with 300-kg (661-lb) in his recent training session. This workout was just a part of his currently ongoing preparation for 2022 Middle East’s Strongest Man, which will take place on Aug. 27-28, in Dubai.

Larry Wheels divided the 72 repetitions into nine sets of eight. Furthermore, the change in his way of training and addition of more reps has really improved Larry’s physique. In terms of appearance, his back has shown the most improvement. Larry is proud of his growth, and with the pump from the deadlifts, he decided to address it in the video, alongside some other stuff.

Larry’s deadlifts were not raw, as he used a suit to aid him in the lifts. However, suits are allowed in Strongman competitions.

“We are on track for pulling a 1000 pounds at 2022 Middle East’s Strongest Man. On top of that, I am looking to become the lightest man to ever do it with a conventional stance.”

Larry Wheels completed three variations of deadlifts, which were deficit, block, and standard deadlifts. Apart from building up his endurance, Larry also used these sets to find out what breathing pattern suits him the best.

“If you haven’t noticed, my back is thick as f**ck right now. My t-spine area, rhomboids, traps, obliques, everything has gotten substantially thicker.”

What makes Larry Wheels’ recent improvements even more impressive is that he has lost weight and now sits at 122 kilograms (269 pounds). Larry also revealed that he stopped taking growth hormones.

“I’m on just three meals a day. Normal portions, like 800 calories per meal, not force-feeding, and I feel great.”

After Larry Wheels finished his last deadlift set, he moved on to do a back workout. This video shows his absolutely massive back, which is also well defined.

Larry Wheels has previously dominated the powerlifting scene, won a bodybuilding show, and tried out in arm wrestling. He found success in each sport, so Strongman will probably be the same.

Larry Wheels has already taken part in one Strongman competition, which was the 2019 Odd Haugen Strength Classic. He is now looking forward to another appearance, but this time looks a lot more promising. Larry has recently revealed that he is very serious about his Strongman career, and even compared himself to Oleksii Novikov. He thinks that there is a realistic chance of him becoming the World’s Strongest Man at some point in the future or at least claiming a win in one of the greatest competitions.

The 2022 Middle East’s Strongest Man will feature a deadlift event, which is the reason why he is focusing so much on it. He also considers the deadlift as the greatest exercise and wants to become the lightest person to pull 1000 pounds with a conventional stance. Larry currently looks amazing, so it could definitely become a reality in a few months’ time.

How Many Calories Do You Burn Doing Side Planks?