Larry Wheels pulls 27 reps of 708.1 pounds in his first training session with a deadlift suit. 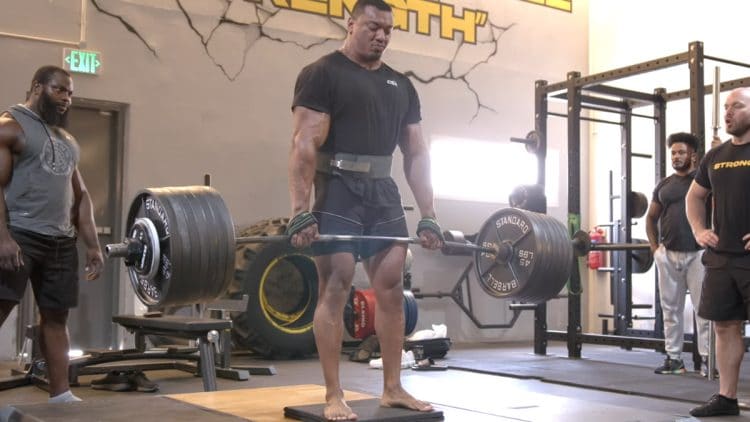 Larry Wheels has mastered almost all strength sports, having excelled in powerlifting, bodybuilding, and arm wrestling. However, he is now preparing for a Strongman competition, as he wants to add a medal from this sport to his resume as well. Larry intends to compete at the 2022 Middle East’s Strongest Man, which will take place on Aug. 27-28, in Dubai. As one of the events at that contest will be the max deadlift, Larry wants to claim as many points as possible. On May 11, Larry posted a YouTube video in which he deadlifts 708.1 pounds (321.2 kilograms) for 27 repetitions for a volume PR.

Granted that Larry Wheels did not do all of these reps all at once, but sectioned them into nine sets of three. His first three sets were block pulls, followed by three sets of deficit deadlifts, and Larry finished the session with another three sets of normal deadlifts. Larry used a deadlift suit, lifting belt, and straps to aid him in the lift. All the equipment is allowed in Strongman, while Larry also utilized a conventional stance, as sumo is prohibited in the sport.

Larry Wheels started the deadlift session with block pulls. Since it was his first time using the deadlift suit in this preparation, Larry had to focus on locking out the weight properly. The suit helps with picking the bar off the floor, but it does not have a beneficial effect on the lockout phase.

“We’re still working the floor speed with the block pull, lockout power with the deficits, and then we’re going into floors (standard deadlifts) just to get the system working on pulling from the floor.” said Larry’s coach, Mark Boyd.

Larry Wheels has completed a taxing agility and sprint training just a few days before, which makes his recent deadlift session even more impressive. Furthermore, on May 3, Larry deadlifted 937 pounds (425 kilograms), after which he announced a PR attempt in August. Judging by the intensity of his training, Larry could potentially pull over 1000 pounds (453.6 kilograms) by then.

There is no doubt that Larry Wheels was thrilled to see a max deadlift listed as one of the events in his upcoming Strongman competition. The reason is that Larry is one of the greatest powerlifters the world has ever seen, having won 11 of the 16 sanctioned competitions in which he took part.

Larry Wheels has already participated in one Strongman competition, which was the 2019 Odd Haugen Strength Classic. He is now preparing for an even more prestigious contest, and his recent deadlift session is a statement that Larry will be battling for the first place.