Larry Wheels plans to dedicate himself to Strongman, as his feelings are that he is capable of achieving some incredible things. 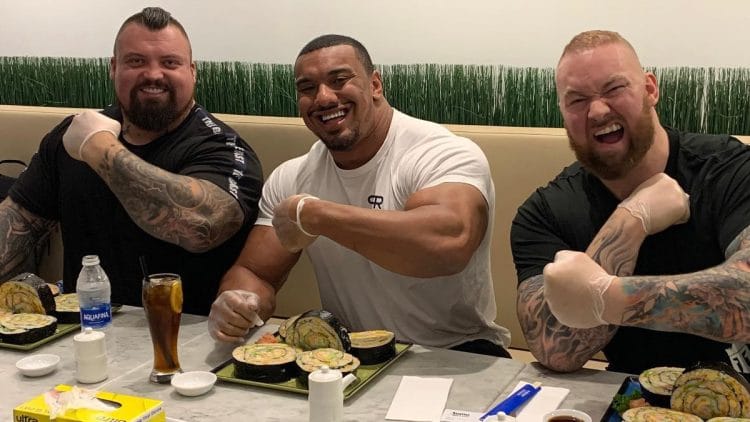 Whenever Larry Wheels makes a switch in his career, it is almost always because he knows he has a chance to succeed. After becoming one of the greatest powerlifters ever, winning a bodybuilding show, and taking part in professional arm-wrestling matches, Larry is now ready to push his limits in Strongman. He is preparing for the 2022 Middle East’s Strongest Man, which will take place on Aug. 27-28, in Dubai. This will be Larry’s first major competition, and in the wake of his recent interest, he took to YouTube and discussed his future.

Larry Wheels firstly reminisced about his powerlifting days, and explained how his physical proportions would fare in Strongman. The competitors in Strongman are usually very large even in comparison to Larry, which means that they get better leverages.

“I’ve always been the lighter guy lifting more than the bigger ones… I have really well leverages for squat, bench, and deadlift… What really motivated me, as of late, to get back into Strongman and give it a try is now that Thor and Eddie are no longer competing, that kind of levels the playing field for everybody.”

Related: Powerlifter Larry Wheels Discusses PED Use During Career: “Worst of Them Has Definitely Been Tren”

Larry Wheels then went on to compare himself to Oleksii Novikov in the terms of size and revealed that he believes that a win in the most prestigious Strongman sport could be possible.

“He (Oleksii Novikov) is six foot, 130 kilograms (286.5 pounds) and he beat a lot of the giants. I’m very close to 130 kilograms, so it is very realistic that I could pull off the first-place win in the WSM (World’s Strongest Man) or WUS (World’s Ultimate Strongman), which are the two biggest comps.”

Larry is aware of the challenge and hardships that will come with the title charge, as he recognizes that injuries in Strongman are a major problem. They can happen at any time and ruin everything. Ultimately, he would need to be ready for anything, and exploit any chance he gets.

“If you can get through a prep healthy and make it to game day uninjured and peaked appropriately, maybe the giant guy will be injured and he is not a hundred percent.”

As absurd as it sounds, Larry Wheels would be the ‘smaller’ guy in the greatest Strongman competitions. However, he knows how to use that to his advantage.

“Your speed and conditioning are really important, and being the lighter guy I’ll have the advantage of that. A lot of the Strongman competitions have a healthy balance of speed and conditioning plus a one rep max compound. If you are 180 kilograms (397 pounds) and 6-foot 8-inches, you can only move but so fast.”

Larry Wheels also pointed out how much respect Strongman athletes deserve, as they have such a high risk of injury. Before moving on to the next subject, Larry Wheels specified his goals.

“To win as many comps as I can. There is World’s Strongest Man, World’s Ultimate Strongman, there’s Arnold (Strongman Classic). The Arnold would be most satisfying because of the atmosphere.”

Larry Wheels feels that for the past four weeks, the Strongman training has made him a well-rounded athlete, who is much lighter on his feet. Larry has proven numerous times that he stands behind his words and will work as hard as possible until he reaches his goals. In the upcoming Middle East’s Strongest Man, we will witness Larry’s progress once he performs.