"The Persian Wolf" looks to have packed on some quality muscle mass judging by his recent physique update. 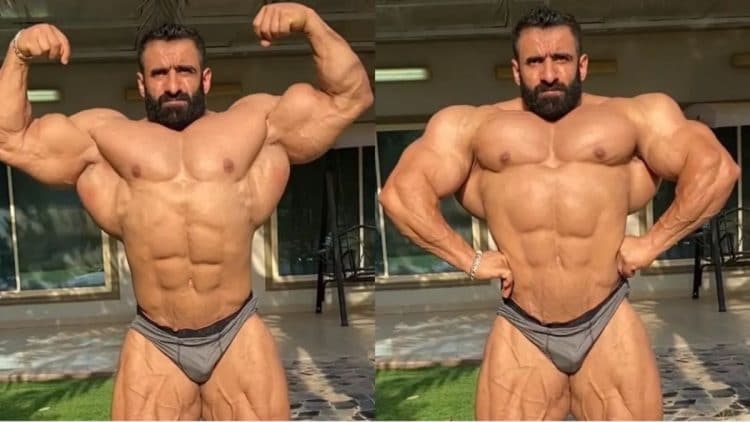 Marveled for his year-round razor-sharp conditioning, Hadi Choopan remains one of the top bodybuilders in the world. In a recent physique update posted to Instagram, Choopan showed off his off-season gains roughly six months from 2022 Mr. Olympia.

A picture of consistency, Choopan has never placed outside of the top five at any Mr. Olympia contest that he’s participated in. The Iranian native brought the heat in his first Olympia appearance in 2019, a competition that saw him reach third place in his debut at the show. Sure, he may have a shorter stature compared to some of the mass monsters in the Men’s Open division, but he makes up for it with detailed conditioning and symmetrical proportions.

Choopan placed fourth at 2020 Mr. Olympia and is eager to prove that he is more than capable of winning a coveted Sandow trophy. However, last year, he once again landed in third place at 2021 Mr. Olympia even though he made notable improvements to his physique. While he has yet to reach the top of the podium, Choopan is pouring it on during his off-season this year to ensure he makes history this winter.

In a recent physique update made to Instagram, Choopan shows off the gains he’s made in the heat of off-season preparations for his fourth attempt at Mr. Olympia.

Choopan will have his hands full this year at 2022 Olympia. Thus far, aside from 2019, Mamdouh ‘Big Ramy’ Elssbiay has ruled over the Men’s Open division with an iron fist. He is the reigning two-time Mr. Olympia, and when his conditioning is on par with his peers, it’s lights out for his competition.

In addition to Big Ramy, the 34-year-old will be tasked with facing a familiar foe in 2019 Mr. Olympia Brandon Curry, who took second place at last year’s contest. He has no room for error as 2021 Olympia top finishers Hunter Labrada, who took fourth, and bodybuilding star Nick Walker, who placed fifth intend to handle their business in six months, determined to earn their first victory at the prestigious show.

This isn’t the first physique update Choopan has given his fans this year. Back in March, the Men’s Open standout provided a sneak peek of his build right as he kicked off prep for his 2022 season in the sport. Comparing his physique to what he presented in March, Choopan looks absolutely shredded.

Under the guidance of Hany Rambod (who also coached seven-time Mr. Olympia Phil Heath), many believe this year will be the one where Choopan rises to the top. Rambod insists that Choopan had the best physique at 2021 Mr. Olympia despite the results.

RELATED: Hadi Choopan Was ‘The Best Conditioned Athlete’ At 2021 Olympia, Says Lee Haney And Others

Choopan’s consistent nature always makes him a live dog headed into any bodybuilding contest. Following his recent update, it’s safe to say Choopan’s off-season preparations are moving along in the right direction.