Larry Wheels' celebration of his massive deadlift triple PR proved how much it means to him. 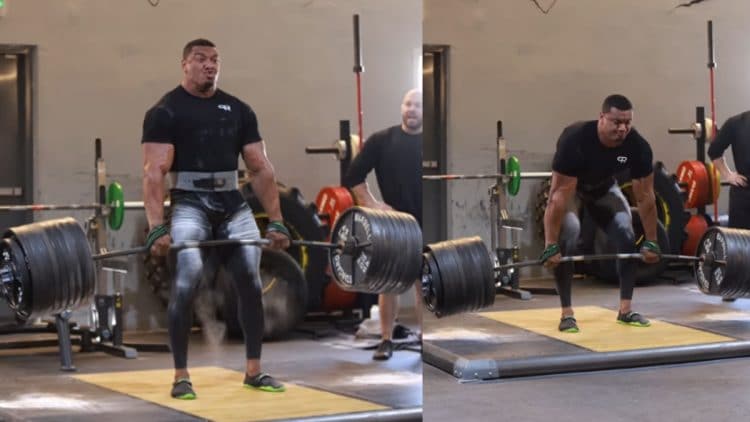 For the past few weeks, Larry Wheels has been fully focused on improving his already incredible deadlift skills. This is mainly because it is a part of his preparation for the 2022 Middle East’s Strongest Man, which will take place on Aug. 27-28, in Dubai. Larry, however, stated in a recent interview that regardless of the competition, his goal to deadlift 1,000 pounds remains the same.

Larry Wheels has been gaining some serious momentum ever since he deadlifted 425 kilograms (937 pounds) a few weeks back. Following this lift, Larry announced a PR attempt in August. Not long after, he shared a training session, which perfectly portrays his current training program. Larry performed nine sets of triples with some serious weight.

Larry’s attention to detail and hard work has obviously paid off, as he shared a new deadlift triple PR on Instagram. Specifically, Larry Wheels deadlifted a colossal 930 pounds (421.8 kilograms) for three repetitions. Larry Wheels went absolutely bonkers from joy after he claimed a new PR. His first reaction was to yell his lungs out, followed by hurling his lifting belt across the gym. This just proves how driven Larry is to succeed.

Larry Wheels’ bodyweight at the time of the lift was 275 pounds (124.7 kilograms). As he is training for Strongman, Larry used a deadlift suit, lifting belt, and figure eight straps to aid him in the lift. His stance was conventional, as sumo is not legal in the sport. We could also see Larry utilize hitching on his final repetition, which is allowed in Strongman.

One of the events at the 2022 Middle East’s Strongest Man will be the deadlift for max, and Larry Wheels looks to be a potential favorite. He recently opened up and explained his reasons for the sudden interest in the sport. Larry believes that he could become a top-level Strongman athlete and potentially a winner of the World’s Strongest Man (WSM) or World’s Ultimate Strongman (WUS).

As Larry Wheels excelled in everything he attempted, there is no question he’ll succeed as a Strongman competitor. Larry firstly dominated the powerlifting scene by claiming a few World Records. He then made a switch to bodybuilding and even won the 2018 NPC Gold Coast Muscle Classic. Since then, Larry has been involved in multiple arm-wrestling matches, and is still improving. Furthermore, he is a big advocate for the sport and is pushing it to the next level.

Larry Wheels’ incredible sports resume makes it impossible to dispute anything he says. If he set his sights on the most prestigious title in Strongman, there is no doubt that Larry will give his all to achieve it. The opportunity to follow Larry on his journey to becoming one of the best strongman athletes in the world will remain available to everyone as he shares his lifts and accomplishments on social media.