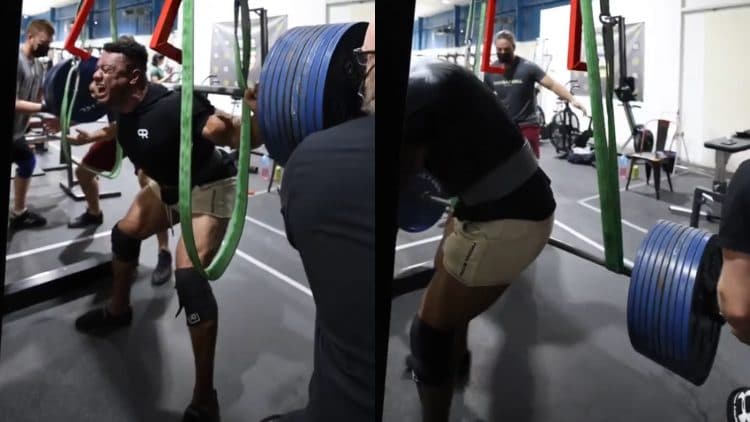 Larry Wheels has been having a tough run of it in the gym lately, as far as injuries are concerned. Apparently he hurt himself big time recently, tearing his quad while doing heavy squats.

As much as Wheels is known for being the PR wrecking machine, seemingly always setting new personal bests, that does not come without its risks. There have been numerous times that the young powerlifting phenom has either suffered an injury while lifting, or nearly hurt himself, tweaking something.

The former was the case during a recent training session, which he posted to his Instagram. Here Larry can be seen trying to move some heavy weight with his squat, only to apparently tear his quad mid lift, forcing him to toss the weight off of his shoulders in agony.

“Everything was going great until I ripped my quad in half 😅
Another day in the office!” Wheels captioned.

Larry did not say exactly how much weight he was trying to squat when this happened, but there are nine plates on each side of the bar, meaning it had to be massive. Luckily he had the bands there to catch the bar when he dropped it, but even then he needed the help of his spotters to keep the squat rack upright, after that force pulled on it.

Time will tell how serious this injury is, and if Larry Wheels will need to get surgery again. However this is not the only issue that he has had while squatting in the last few weeks, nearly getting crushed by a 925lb double, using chains, just a few days earlier.

Hopefully whatever happened during this most recent squat is not so serous that it keeps him from training, especially since he had been working to make a return to competitive powerlifting. That being said, it is hard to ignore the idea of this just being a result of the near injury that he suffered in that previous squat.

Of course, the most important thing to be concerned about is the safety of Larry Wheels. If he truly did tear his quad in half, that is a terrible injury that would take time to heal, so hopefully the recovery process from this mishap is a smooth and easy one.

That being said, it is exciting to see Larry moving this type of heavy weight again, but concerning that he keeps hurting himself. Hopefully he and his team can figure out what is going wrong, so that they can keep him healthy and lifting.