A heavy squat session almost ended badly for Larry Wheels, when he tried to push himself too far 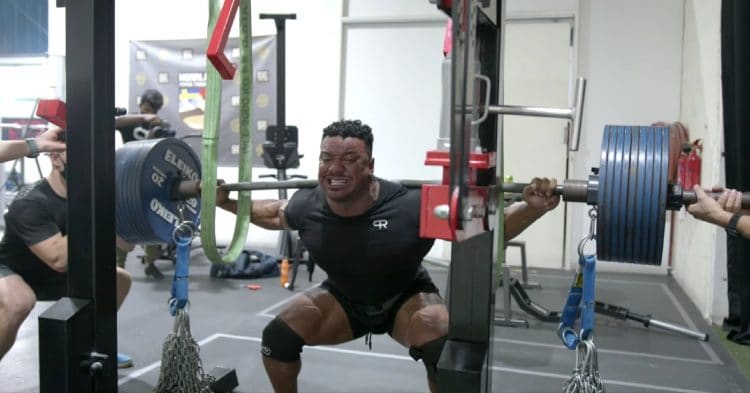 There are enough videos of people getting hurt in the gym to realize that having good spotters is paramount when moving heavy weight. This proved true for Larry Wheels recently, when his spotters saved him from potentially catastrophic injury.

Wheels has been looking back to form since deciding to make a return to powerlifting. After taking some time to dabble in the world of arm wrestling, he is back to the heavy lifting and has been putting up some monstrous numbers in the gym, ahead of his comeback to competition.

However things almost took an ugly turn in one of his training sessions ahead of this powerlifting meet. A video he posted to YouTube saw him going through a squat training session, which ended with him almost getting injured, when trying to do a 952lb squat double while using chains, only to fail on the second rep and need the help of his spotters.

In the full video, Larry Wheels worked his way up to this massive squat with some work without the chains. He then did a few sets with chains too, building from 621.7lb plus the weight of the chains without wraps, to 687.8lb plus chains with knee wraps, before eventually making it to the big 952lb squat, which was made up of about 864lb in actual plates, with the rest of the pounds coming from the chains.

Following the near catastrophic lift, Larry did say he was okay and likely not seriously injured. Although he did feel some sort of pop in his quad, which he says could have just been a bit of a strain from the weight, which he was able to squat successfully for one rep.

“I didn’t get the second rep. The first rep was a grind, but the grind I felt was largely just due to the chains. I felt like I could grind out another one. I was wrong,” Wheels said.

“There could be some scar tissue… Or there could be a small strain in my quad. So not sure exactly, but frankly if it was a major injury — which I’ve had, I’m not new to injuries, I’ve injured myself several times doing squats — I would have collapsed under the weight immediately. I was actually holding up the weight, granted (my spotters) were helping out… But I was holding a significant amount of my weight on my back, in the hold, and that tells me that whatever that little pop I felt was, isn’t serious. Maybe a small strain, maybe some scar tissue, nothing to be worried about.”

It is good to hear that Larry Wheels did not seem to suffer too serious of an injury, especially with how close he came to getting hurt much wor