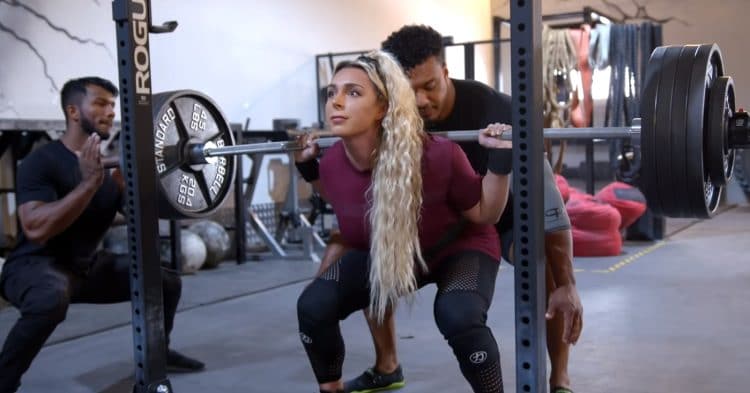 Powerlifter Larry Wheels recently teamed up with IFBB Pro bodybuilder and powerlifter Kiera Aston for a squats session. Wheels is a record-wrecking machine that is known for breaking personal bests in the gym. Aston, who became the youngest IFBB pro in Europe, is known especially for her impressive deadlifts. The duo went through the lifting session in the Strong gym and Larry Wheels uploaded the video on his YouTube channel.

Kiera Aston started the session with a goal to squat 226.8lbs (500lbs) which she revealed to be about 20 percent heavier than her current personal best. Wheels, who is at the end of his steroid cycle, targeted to end the session with 10 to 15 reps of 310kg (lbs) with knee wraps but ended up pushing through heavier weight.

The duo started warm-up squats with moderate weights and lifted:

“I spend more time in the hold, make sure I’m down there, pause squats and sometimes you like the tempo and sometimes one and a half squats just really spending the time down in the hold as much as possible. So hopefully on the day, it’s actually ingrained in my brain to actually stay down long enough. It’s definitely working. My squat depth has got a lot better so far,” Kiera Aston said.

When Larry Wheels inquired about the reasons behind deliberately walking backward after lifting the bar, Kiera Aston said:

Larry Wheels seconded Aston’s thoughts and added that a monolithic squat rack, although, designed to give better stability, does not feel as comfortable.

“As of late, I was using the (monolithic squat rack). But using the mono never felt as comfortable as walking on my squat. When you walk your squat, the weight settles on your back and you do get that extra stability from the core. You have to breathe and be more conscious about that.”

“When you wedge your feet after walking out, you just feel like everything is more settled. But with the mono, you get to have your feet placed perfectly,” Larry Wheels said.

Kiera Aston explains why she does not use knee wraps

The powerlifter duo increased the weights for further sets and got in a couple of more sets. Aston executed her heaviest lift of the day and squatted 226kg (500lbs) while Wheels squatted 265.4kg (585lbs).

Following Larry Wheels’ 265.4kg (585lbs) squat, Kiera Aston initiated the conversation about using knee wraps for squats. She explained that as she tends to hold the squatting position during her reps, knee wraps act as a hindrance, and therefore she does not opt for knee wraps even for the heavier lifts.

Aston feels that she can actually get a higher total in the raw lifts than the wraps on. However, she is planning to give them a go a few months down the line. Wheels advised Kiera Aston that the right kind of wrap from a good wrapper could actually yield good results.

Larry Wheels explains how he manages training for different sports

Larry Wheels switches between training for powerlifting, bodybuilding and arm wrestling. When Kiera Aston inquired how he manages to maintain the balance between different disciplines.

“Right now, I’m having fun with powerlifting style of training which I’ll shoot in my squat and bench training weekly. I’ll have two bodybuilding days for arms and for legs. But for arm wrestling, while my coaches were here, we were doing arm wrestling training four days a week and it was pretty brutal.”

“But I’m never really doing two sports at the same time. So I always do one sport, take a break, choose another. That way it gives my body time to heal for the gamble,” Larry Wheels said.

Following the warm-up sets, Larry Wheels and Kiera Aston proceeded to complete the final set with targeted weights to conclude the squat session.

Courtesy of Larry Wheels’ YouTube channel, you can watch the full video of the training session here: