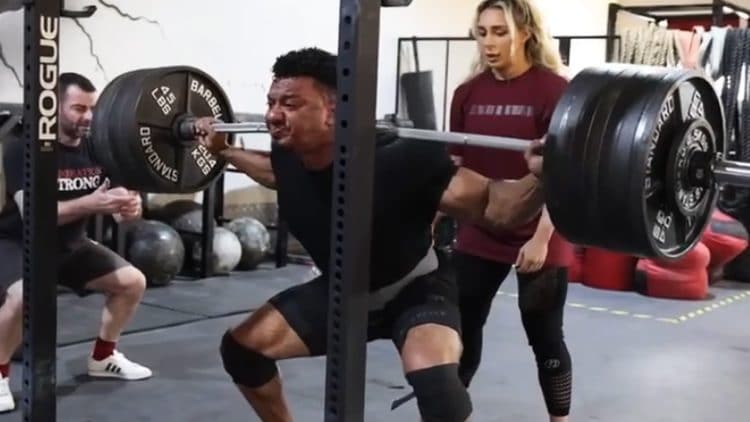 In the latest addition to his Instagram, Larry Wheels showcased his full working set of squats, with the bar stacked with weights, coming out to a massive 317.5 kilograms (700 pounds). Larry is no stranger to some monumental lifts, but he was not able to lift as heavy, while recovering from an injury for some time now.

Judging by some of his latest training sessions and lifts, it was evident that Larry was coming back to his best self, but this back squat set is very impressive, and suggests that he is back to 100%.

Larry’s description implies that he is not holding back anymore and that he is giving his all on the lift:

But Larry knows that heavy lifts come with some great risk involved, as he commented on his own post:

Larry used a lifting belt and knee sleeves to aid him in his lift. He was also very cautious with his lift and had three spotters ready to help him.

Larry’s last few squat experiences have been pretty traumatic, with his last injury coming from the squat. It happened back in September, and Larry announced that he suffered a quad injury through his Instagram account. It is not clear how much weight Larry attempted to lift, but he had 9 plates on each side.

Just before that, Larry almost got crushed by the bar when he tried to do a second rep with 420 kg and some chains attached. And in Larry’s recent leg session with Noel Deyzel, while they were doing some heavy front squats, Larry Wheels witnessed an incident where Noel almost injured himself while going for a PR, after which they discussed their previous injury experiences.

Larry Wheels seems to be getting better in everything he does. His arm wrestling career is getting better, despite the loss against Brandon Allen, and he is getting some new personal records in the gym. Larry has taken a longer recovery from his injury than the doctor recommended, so he seems to be taking good care of himself.