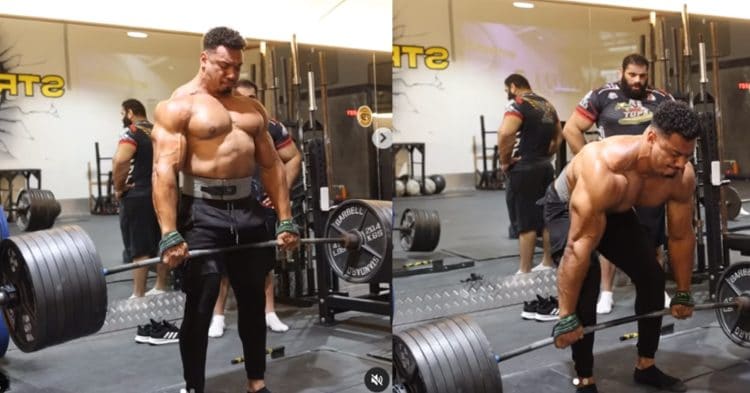 Larry Wheels seems to be one of those people who compete with themselves to be the best. The 26-year-old is no stranger to setting personal records and regularly shares his personal achievements on social media. Wheels is back to his ‘set the record’ way as he recently set the personal best record for deadlift and posted the video on his Instagram account.

However, Wheels is not a stranger to heavy-lift records and has successfully deadlifted heavier weights in the past. In early 2021, Larry Wheels deadlifted 387kg (855lbs) for three reps at the Strong Gym in Dubai, UAE to set another personal best record. Unfortunately, the achievement came at a cost as Wheels suffered an injury while performing the backdown set of 310kg (685lbs).

While both these records are great in their own right, Larry Wheel’s personal record of 419kg (924lbs) deadlift single is his all-time best record.

In the caption to his post, Larry Wheels revealed that he has not deadlifted in nearly two months and attributed the successful record to taking proper rest.

Without a doubt, Larry Wheels is a record-breaking machine. However, his lifts sometimes come at a cost of injuries. The 26-year-old powerlifter has suffered numerous injuries over the last few years. Back in September, Wheels tore his quad while trying to move weights with his squat and shared the news in an Instagram post.

“Everything was going great until I ripped my quad in half. Another day in the office! @teampersonalrecord ,” Larry Wheels wrote in the caption to his post.

The quad injury could not put a stop on Larry Wheels’ record-breaking quest. Since the injury, Wheels has set the personal best record for 17 reps of 63.5kg (140lbs) Dumbbell Shoulder Press and 4 reps of kg (585lbs) Bench Press.

Larry Wheels’ approach might appear risky and even dangerous to an average gym-goer. However, Wheels plans to compete in the WSM competition someday and might benefit from his never-back-down attitude. That being said, we hope that the powerlifting phenom finds a way to stay injury-free to ensure performance longevity.