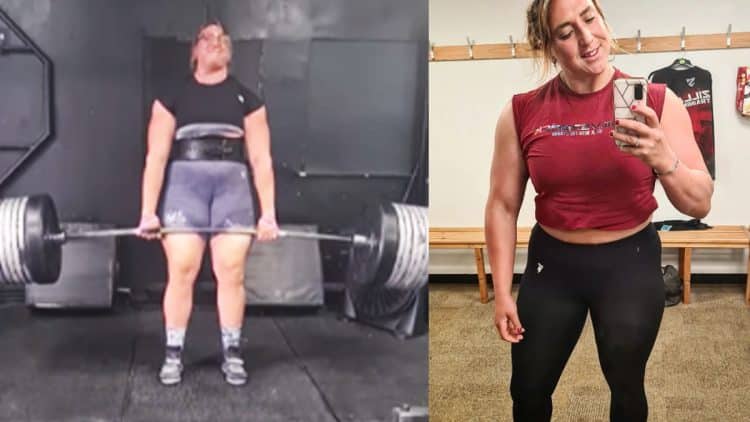 As Lucy Underdown once again endeavors to make history, this is nothing new to her. Despite being relatively new to the sport of Strongwoman, Lucy has already blown everyone’s minds on multiple occasions and earned the title of the greatest female deadlifter in history. Although Lucy does not have anyone even close to her regarding this event, she continues to set goals that encourage her to continue improving.

Lucy Underdown has just reached new heights in her career, as she deadlifted 2.5 kilograms (5.5 pounds) over the Strongwoman Deadlift World Record in a recent training session. Luckily, Lucy recorded her colossal 302.5-kilogram (667-pound) deadlift and posted it on Instagram on Aug. 02, 2022.

Lucy Underdown explained how she was supposed to perform a 265-kilogram (584.2-pound) deadlift, but felt really good and decided to go much heavier. Impressively, Lucy completed the incredible feat of strength without the help of a deadlift suit, which is allowed in Strongwoman. She only used a lifting belt and lifting straps, while her stance was conventional.

“When it’s Heavy Deadlift day, you’re feeling in good form and you’re prescribed a 265kg single… What do you do??

Yea you pull 2.5kg over your current World Record 😁😂

The current official Strongwoman Deadlift World Record stands at 300 kilograms (661.4 pounds), as Lucy Underdown set it at the 2021 UK’s Strongest Man. It was a competition for the men, but Lucy got invited to break the World Record. She was successful and made the contest even more interesting.

Lucy Underdown has been doing Strongwoman professionally for just over two years. She has taken part in three competitions, but did not win any of them. However, she did score two podium finishes. Lucy placed seventh in her first competition, which was the 2020 Arnold Amateur Strongwoman World Championships. She then got her first bronze medal five months later at the 2021 UK’s Strongest Woman.

Lucy Underdown’s third career appearance was the 2022 UK’s Strongest Woman, which took place just over three months ago. She hoped to improve on her previous third-place finish, but ultimately claimed a bronze medal once again. However, she was very close to the second-place finisher, as Donna Moore only had half a point of advantage.

Lucy Underdown now plans to compete at the 2022 100% C.A. Britain’s Strongest Woman, which will take place on August 14, 2022, in Doncaster, England. It is evident that she is prepared to take on any task thrown her way, so maybe this is her first victory. It is currently not clear if Lucy will attempt to break the Deadlift World Record or if she is focused on the competition overall.